Saturday's show: The political climate in Washington with Barry Casselman, The Prairie Editor

From winning the shutdown debate to good economic news to Davos, it was a good week for President Trump.........click to watch: 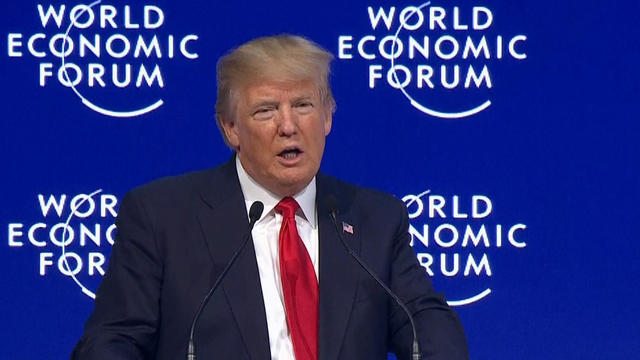 As I watched President Trump speak at Davos, I couldn’t help but remember the Reagan 1984 TV ads called “Morning in America.” Those ads were a 60-second promotion for the U.S., a signal that things were good again. All that VP Walter Mondale could do was work very hard to make sure that Minnesota didn’t vote for President Reagan, too.
President Trump was a salesman for the U.S. in Davos:

“The world is witnessing the resurgence of a strong and prosperous America,” Trump said. “I’m here to deliver a simple message. There has never been a better time to hire, to build, to invest and to grow in the United States. America is open for business and we are competitive once again. The American economy is by far the largest in the world and we’ve just enacted the most significant tax cuts and reform in American history. We’ve massively cut taxes for the middle class, and small businesses to let working families keep more of their hard earned money.”

It was a great message, unless you are so angry about the election of 2016 that you’ve lost your common sense.
What I saw at Davos was a confident man, marching ahead and telling the world that the U.S. is the best place to invest or open a plant.
Yes, it’s a lot like those “Morning in America” ads that had such an impact in 1984.
P.S. You can listen to my show (Canto Talk) and follow me on Twitter.
Posted by Silvio Canto, Jr. Post Link ---> 10:30 PM

The honest professor speaks out

The honest professor speaks out on the photo that was kept from US voters until his two terms were over........."Dershowitz: I Wouldn't Have Campaigned for Obama If I Knew About Farrakhan Pic...."
— Silvio Canto, Jr. (@SCantojr) January 27, 2018

Getting stranger by the day

A post from July 2006: And now GITMO goes to Congress!


What did the Supreme Court really say? What does it really mean politically?

Mark Davis is a local talk radio host (WBAP) and he just posted this on RCP:


"Democrats and detainees may be chortling with glee for the moment, but they may soon get a dose of the danger of getting what you wish for.
Guantanamo's "guests" may now find themselves in an extended Cuban limbo, eligible for neither a tribunal nor immediate release.
And the President's enemies on Capitol Hill may not welcome another vote-- even closer to election day-- which will provide further evidence that they lack the seriousness to be trusted on the war in the first place."


We are now going to force Democrats to take a position on GITMO.

Also, how many Democrats agree with Justice Stevens that terrorists are covered by the Geneva Convention? My guess is that most Democrats will find this portion of the decision as silly as I did.

Our side always wins when Democrats have to vote. We will soon be voting.
Posted by Silvio Canto, Jr. Post Link ---> 2:00 PM

Jed Babbin knows national security.   The NYTimes does not.


"We have had, in the past year, three instances of stories published by the Times and the Washington Post that have severely reduced our ability to interdict, capture and disrupt terrorists. These actions, by the most irresponsible press in the history of the nation, have greatly reduced our ability to fight the war against terrorists and to protect our homes from terrorist attacks. In two of the three - the WaPo story of the secret CIA prisons and the NYT articles on the SWIFT program tracing terrorist fund transfers through the Belgian conglomerate - the newspapers revealed both directly and indirectly the nations that were cooperating with us in secret. And "were" is the operative word."

Freedom of press is a wonderful thing. What we have seen here goes beyond that. This is a total disregard for the safety of US citizens.

Again, check the advertisers. Call them and tell them that you do care when secrets are recklessly published on the front pages.

A post from July 2006: Say hello to Presidente Calderon

Bu 11pm tonight, political analysts will be talking about the two Mexican nations. The 2006 election will remind many of us of those US electoral maps from 2000 and 2004.

Calderon will win because he will sweep the north and the middle class. AMLO will win the south but it won't be enough to win. Also, enough conservative PRI-istas will switch to give Calderon the votes to cross the line.

Calderon will have ideological soulmates in Pres. Bush and Canada's new conservative PM Harper. At the end of the day, Mexico needs to be integrated further into the North American economy.

It won't be easy. AMLO won't go down quietly. Mexico will be very polarized on a regional basis. AMLO will urge his voters to march and claim fraud.

The bottom line is this: say hello to Presidente Felipe Calderon.

"A sudden outburst of temper....Thought to originate from contraction of "hysterical fit."


"The expansion, being fueled by Mexico’s top five automakers — General Motors, Ford Motor, DaimlerChrysler, Nissan and Volkswagen — stands in contrast to the plans by G.M. and Ford to cut 60,000 jobs in the United States and close two dozen North American plants through 2012.
The reason for Mexico’s new wave of growth is twofold.

First, it is next to the world’s largest auto market, allowing greater production integration because auto companies can easily ship cars and parts by truck and rail.
And second, it is still cheap to operate here compared with the United States, where unionized workers earn at least $27 an hour and benefits can double or even triple the total cost.

By comparison, Mexico’s typical auto industry wage of about $3.50 an hour for an experienced worker — which doubles with benefits — looks like a bargain."


What about the future:


"New investments could raise Mexico’s production to three million cars by 2012, depending on growth in the United States, Mexico’s main market, according to Emilio Mosso, an official at the Economy Ministry.

In part, the boom is a rebound after sales slumped for aging models made in Mexico, and automakers halted production to prepare for new models.

Exports are up 50 percent in the first six months of the year from the same period last year.

About three-quarters of production goes abroad, mostly to the United States. And analysts say that figure could rise.

“When companies look at where to put a new plant, Mexico is starting to compete a lot more with Detroit South,” said Gabriel Renero, a consultant at Deloitte in Mexico City.

“They are finding a very attractive work force in this country.”

Democrats will jump on these figures to beat up NAFTA and free trade.

NAFTA is not the problem. Our challenge is that we are in a new world economy!

The customer is always right or something like that.......

Over time, we've always treated our customers with respect..or as they say don't insult the people who pay your salary or buy your products......then we see this headline: "Clothing Company Founder Finds Out it's Not a Great Idea to Call His Fox Viewing Customers 'Idiots'"
— Silvio Canto, Jr. (@SCantojr) January 27, 2018

Can we agree that Peter Strzok and Lisa Page were talking too much?

Can we agree that Peter Strzok and Lisa Page were talking too much?
— Silvio Canto, Jr. (@SCantojr) January 27, 2018

The Rangers had a pretty good road trip. They split with the Orioles, and then won 2 of 3 from Toronto and Chicago. Not bad.

Vicente Padilla continues to pitch very well. On Sunday, he lost to Chicago but gave one earned in 7 innings. Padilla has exceeded expectations. He is on his way to winning 15-17 games.

The Rangers are half a game back. I'm still worried about the Angels, who have the best team in the AL West. The division will be settled in September when the four teams go at each other.

Between now and Labor Day, the Rangers need to stay with the A's and Angels. Hopefully, they will add a veteran starter and get Adam Eaton back in the rotation.

Heard a rumor:   Vernon Wells to Texas for Kevin Mench and Joaquin Arias, the great AAA prospect. I like Mench but Wells would be a great addition. Besides, Wells is a local kid who attended Arlington high school.

Can the Rangers make a pitch for the Braves' John Smoltz? It may take a young player like Hank Blalock but that may be too much.

What about bringing back Soriano? Not a bad idea. Again, at what cost? Soriano is having a career year just in time to negotiate a free agent contract this winter.

ARod and the Yankees are here for 3 games.

Last week, ARod became the youngest player to reach 450 homers. Yet, the talk in New York is that ARod is making too many errors and leaving runners on base. that ARod's best chance to play in the Series was Seattle.

In Texas, ARod was a misfit from day one. He had 3 super years but the team finished in last place. After 2003, he forced the Rangers to trade him to Boston or New York.

The Rangers did and now ARod is a miserable Yankee or so they say in the New York media.

It happened a long time ago

This is quite a story about migration and the early days of man:


All that remains is the left half of an upper jaw, with some fragments of palate, cheekbone, and the floor of the nasal cavity still attached, along with a complete set of upper left teeth.
But those fragments of bone mean that modern humans probably found their way to southwest Asia about 40,000 to 50,000 years earlier than fossil evidence previously suggested.
("Humans expanded out of Africa 40,000 years earlier than we thought.....")

In the end, I believe that a Democrat will carry Massachusetts in 2008. However, by how much? And, how much will McCain force Democrats to defend states like New York, New Jersey, Pennsylvania and Michigan.

Let's not forget that Gore and Kerry barely won Minnesota and Wisconsin, a couple of high tax states that are trending Republican. Michigan's Gov. Granholm is in deep trouble because her state cannot attract business or create jobs.

This is why I continue to propose a McCain-Romney ticket.

Romney brings the cultural values because of his opposition to abortion and same sex marriage. He is also a very well spoken man who looks very presidential.

McCain-Romney would be a winning ticket in 2008. They will carry every one of the 30 states carried by Bush plus Wisconsin, Minnesota, New Hampshire, New Jersey and compete in Massachusetts.

I don't see a single Democrat that can stand up to McCain-Romney!