Schumer caught between reality and the left 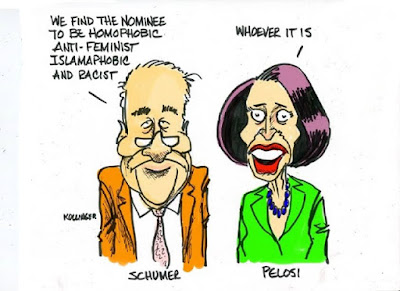 The New York Democrat on Friday accused President Donald Trump of using a proposed path for citizenship for young undocumented immigrants as cover for making sweeping — and damaging — changes to the legal immigration system.
“This plan flies in the face of what most Americans believe,” Schumer said on Twitter. While Trump “finally acknowledged that the Dreamers should be allowed to stay here and become citizens, he uses them as a tool to tear apart our legal immigration system and adopt the wish list that anti-immigration hard-liners have advocated for for years.”
The one-page proposal released by the White House on Thursday would allow as many as 1.8 million young immigrants to become citizens, while also calling for $25 billion in spending on a border wall and security as well as sharply restricting family-based immigration and eliminating a visa lottery system. White House officials are hoping the Senate will put it up for a vote, but it appears doomed to fail.

What do Americans really believe Senator Schumer? Did you forget what happened last weekend with your shutdown?
I like President Trump’s proposal, even if I was surprised by the 2 million. At the same time, legalizing 2 million who are already here may be a very small price to pay for getting all of the other stuff, specially updated immigration laws.
It amazes me that Senator Schumer is not jumping on this plan. It must be because he is getting an earful from the left.
President Trump is winning this battle and Senator Schumer can chat with Senator Manchin about it.
P.S. You can listen to my show (Canto Talk) and follow me on Twitter.