Maybe we won't have Newsom to kick around anymore 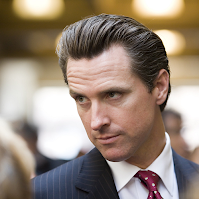 "The times they are a-changing" or something like that.  By the end of 2021, we may have new faces governing New York and California.  In New York, it's probably just another Democrat.  In California, it may be a Republican according to polling data:

Among minorities, Asian-Americans are Newsom’s strongest supporters with 62 percent saying they will vote against the recall measure.

But Hispanics are about split on keeping Newsom in office with 47 percent supporting the recall and 41 percent opposing it.

Whites strongly back kicking Newsom out of office by a 56-35 margin.

It looks as if Newsom may be history soon.

What does it all mean for the future of California?  Is there change coming or is this a rerun of Arnold Schwarzenegger?   All we got out of  that recall was a GOP governor who drove the state further to the left.  Looking back, we may have been better off keeping Governor Gray Davis and running against his bad policies.

Of course, 2021 is not 2003.   I don't know anyone who is happy with the politics of California.  How can you support a total breakdown in the rule of law, from tolerating shoplifting to letting people live in the streets?  Add to all of this very high taxes and it's only natural for Californians to ask what in the world they are paying taxes for?

So let's hope that Larry Elder can deliver a message and break down the left's super majorities.  At least, they can't call Elder a racist but they probably will anyway.