What if Senator Obama had told us this in 2008? 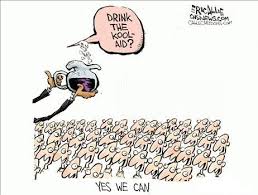 From an executive order on amnesty to his rather cynical evolution on same sex marriage, President Obama is turning out to be a lot more of a leftist than the centrist of 2008.
We just learned this:

The United States Citizenship and Immigration Services (USCIS) has "clarified" requirements for individuals becoming naturalized citizens by stripping out the requirement of defending the United States through military service."Effective July 21, 2015, new guidance (PA-2015-001) in the USCIS Policy Manual clarifies the eligibility requirements for modifications to the Oath of Allegiance. Reciting the Oath is part of the naturalization process. Candidates for citizenship normally declare that they will “bear arms on behalf of the United States” and “perform noncombatant service in the Armed Forces of the United States” when required by the law. A candidate may be eligible to exclude these two clauses based on religious training and belief or a conscientious objection," an email from USCIS clarifying the requirements states (bolding is mine).

Very interesting.
Overall, President Obama has been on a campaign to seek revenge from the voters who repudiated his policies in November.    He is a lot more radical and using executive orders to get what even Democrat majorities did not pass, from climate change to immigration reform.
Why didn't we see this man in 2008?  I think that you know the answer.   It would have confirmed what so many of us said about him:   Most liberal record in 2007!
Get ready for more.   Next on the agenda is the closing of Guantanamo without going to Congress!