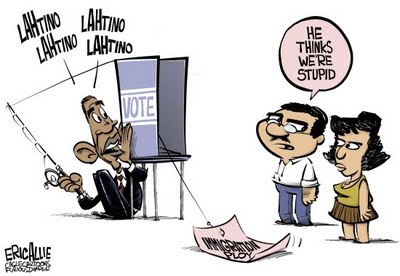 I will leave the constitutional arguments to our wiser AT colleagues.

I will just say that the judge's thoughtful opinion makes a lot of sense to me, or people like me who understand that we don't live in Cuba or Venezuela where presidents write laws or go around the legislative branch.

Color me a cynic, but I think that President Obama always knew that a federal judge would eventually stop his executive overreach, a.k.a. as the immigration executive order. He always saw this as a 4th down "Hail Mary"!

Why do I feel that way?

1) Look at his reaction. He is now saying that we have the law on our side. This is a rather remarkable statement from a man who told us for years that he didn't have the authority to do this. Can he show us the legal opinion that changed his mind? Did AG Holder write such an opinion for him? I think that we deserve to see it.

2) Look at the timing of the executive order. President Obama did not issue this order before the election. He did not force Democrats to vote "yes or no" on a new version of the Dream Act.  Maybe President Obama remembers that a Democrat Senate with 59 votes could not come up with the 60 votes to push The Dream Act to the floor in 2010!

3) President Obama was pandering with the order. He did it for the most cynical political reasons. Now he can blame judges appointed by Bush for the failure of the order.


Again, I think that he knew it all along.  Now, he can blame the GOP for the fact that Democrat majorities never passed immigration reform.

The word in Spanish is "cinico, muy cinico"!  Unfortunately, there are still too many "hispanos" intoxicated in "si se puede" and continue to support President Obama!