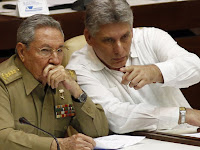 For those who may not know, it was January 1, 1959 that Batista fled Cuba and Fidel Castro filled the vacuum created.
It did not happen as depicted in Godfather II, but he did leave in a military plane with Mrs. Batista, a few friends, and lots of personal belongings.   In other words, people were not running for their boats or revolutionaries willing to blow up themselves for the cause. In fact, most Cubans heard the news on radio or TV, as my parents did.
On January 1st, the Cuban government will celebrate another anniversary. Usually, Fidel Castro gave a multi-hour speech that you had to watch on TV unless you had a radio that could pick up a Miami AM music station.
This year, Raul Castro, who is filling in for sick brother, is telling Cubans to get ready for very hard times ahead. My friend Dr. Carlos Eire brought this speech to my attention today and commented this:

Well…. as unpleasant as it is to say “we told you so,” it’s appropriate to do so after reading today’s article in the Washington Post.
As long as the Castro dynasty and its feudal hierarchy control Cuba, the island’s 11.5 million  serfs and slaves will know nothing but abject misery.
And as long as the U.S. continues to support that regime, the misery will only worsen. Read the last paragraph of the article below to get a glimpse of one of the many reasons for this.
King Raul is taking his  theater of the absurd taken to new levels of absurdity. Call it post-absurdity or neo-absurdity or hyper-absurdity. Unfortunately, the actors in this insane asylum theater have no choice but to play their part or to flee.
And the rest of the world thinks that this theater is absolutely normal, and quite wonderful for the exotic noble savages who are forced to act in it.

Castro appeared to be preparing Cubans for harder times ahead, saying that “we must cut any unnecessary spending and make use of the resources that we have with more rationality and with the goal of developing the country.”
He dedicated a lengthy section of his speech to Venezuela, where the opposition to Cuba-backed socialist President Nicolas Maduro recently took control of parliament amid widespread shortages and spiraling violence.Cheap oil “has affected our relationship of mutual aid with various countries, particularly the Bolivarian Republic of Venezuela, the target of an economic war aimed at undermining popular support for its revolution,” Castro said.
He urged Cubans to avoid what he labeled “defeatism” in the face of a drop in Venezuelan aid, saying “the history of our revolution is full of glorious pages despite difficulties, risks and threats.”
More than 3 million tourists visited in 2015, an increase of nearly 20 percent in the wake of President Barack Obama’s declaration of detente with Cuba. The surge in visitors pumped cash into the state-controlled tourist economy and the growing sector of private bed-and-breakfasts and restaurants, but it also drove up household inflation. In the absence of a wholesale market for private businesses in Cuba’s state-controlled economy, entrepreneurs have been forced to compete with cash-strapped consumers, driving up prices by driving off with cartloads of basic foodstuffs like eggs and flour.

Raul Castro did not blame the embargo or Guantanamo. I guess that will come in the next speech.
Another Castro year starts today and Cuba has gone backward every single year. Of course, I’m not speaking about the Castro family or their Castro Inc. Not at all! Castro Inc. is doing better than ever, especially now that President Obama’s decision is putting more tourists (cash) in the Castro Inc. hotels.
Another year will bring more misery and shortages to people in Cuba.
P.S. You can listen to my show (Canto Talk) and follow me on Twitter.
Posted by Silvio Canto, Jr. Post Link ---> 7:00 AM