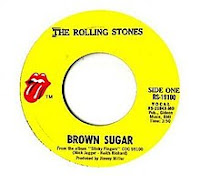 Back in the early 1970s, The Rolling Stones released one of their best and most rhythmic songs:  "Brown Sugar."   It was the lead song on the "Sticky fingers" LP, an album as well known for the cover photo as the tracks.

We learned this week that Mick and the boys are going to retire the song.  Here is the story:

According to Genius' song interpretation, "'Brown Sugar' runs through different white and Black sexual interactions," including nonconsensual sex between a slave and slave owner, who had "total ownership of Black women but also had total physical and sexual access."

The first verse of the song depicts slaves being sold in the slave trade in New Orleans and being beaten at will:

So no more "Brown Sugar." A 50-year-old song is suddenly racist?

Let's file this whole story under the "more demand than supply" for anything racist category.

In fact, this is another example of how so many people crack the minute that a "woke" is on the line.   Mick should have told the "woke" on the phone to stop listening to the song if it offended him, her or whatever pronouns they choose.

As a fan of "Brown Sugar,” I always had trouble making out what Mick was saying anyway.   I always thought that the song was about dancing and nothing more.   It certainly did not have more offensive lyrics than "Let's Spend the Night Together," "Mother's Little Helper," "Beast of Burden," or "Shattered.”

Another win for the "wokes" because Mick Jagger did not stand up to them.  On the other hand, maybe this is a trick to get more people to download a 50-year-old song and make the band a little richer.