Executive orders plus Impeachment again and other stories

Monday’s video: The Democrats want to pack the courts 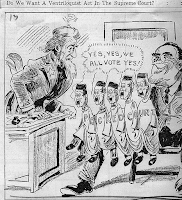 The Dems care too much about the people in Gitmo

Not long ago, many Democrats were worried about the "human rights" of Gitmo terrorists.  They blasted President George W. Bush when he put them there and then when a few rough tactics were used to get information.

They were so outraged that President Obama signed an executive order on day one to end this terrible stain in our reputation.  As you know, Gitmo survived the order, and it's still there.

The latest nonsense is giving the men in Gitmo a COVID vaccine shot.

As a practical matter, I am not opposed to vaccinating the Gitmo terrorists but not before millions of Americans get their shot.  What's the point of giving these men any consideration?  We can isolate them as much as possible until their turn comes at some point later.

Well, public opinion caught up with the Biden administration because the idea has been put on hold or halted.  The outrage came from New York and a few other places:

"Every available dose slated for Guantanamo Bay detention camp prisoners should be immediately redirected to the Hudson Valley," he wrote.

"I have seniors and first responders in the Hudson Valley who are unable to receive the vaccine. Not a single dose of vaccine should be wasted on terrorists who killed American citizens."

I can understand the sentiment.  Why take care of other people before your own?  There are thousands of Americans in line for a shot, and no terrorist should jump ahead of them.