Biden's message problem plus The DOJ vs parents and other stories

Wednesday's video: The White House has a message problem 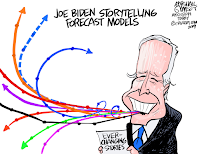 Wednesday's video:
The White House has a message problem
Click to watch:
P.S.  You can listen to my show (Canto Talk).  If you like our posts, click send, and drop a dime here.
Posted by Silvio Canto, Jr. Post Link ---> 10:30 AM

Remember when girls went to the bathroom to powder their noses?

We've come a long way from "double dates" and girls saying that they had to go to "the ladies' room" to powder their noses?  I can recall many times when the two guys left at the table wondered about whatever these girls were talking about.  It all seemed too strategic for us guys left waiting.

Well, that was then and this is now.

Over the weekend, Senator Kyrsten Sinema of Arizona was joined in the bathroom by ladies (and one man) screaming at her and even running the iPhone to show the world what a ladies' room looks like.

And now Ana Navarro, who is always desperate to make the FOX News web site, has an opinion about the ladies in the bathroom.   Honestly, making the FOX site is the only way that anyone hears what Ana has to say.  Not too many people tune in to watch her on her own.

Here comes Ana.  This is from FOX:

"Chasing anybody -- public or private -- into a bathroom, to me is beyond the pail [sic]. Maybe if [Sinema] spent less time in fundraisers with corporate donors and held town-halls to listen to constituents and answer their questions, they wouldn’t chase her into the damn [bathroom]," Navarro tweeted.

Yes, it's wrong but understandable.   I guess that's what she's saying.

There are two problems with what we saw over the weekend.

First, it is the ultimate invasion of privacy.  What's left if you can't go to the bathroom in private?

Second, it shows the hypocrisy of the Left.  They believe in winning at any cost and rules are for the rest of us.

Frankly, I don't know why Senator Joe Manchin stays as in the Democrat Party.  Now, I have the same question about Senator Sinema.