Thursday's show: The gun control at the White House & CNN plus George Washington

We watched President Trump conduct a serious discussion at The White House and then CNN hold an anti-NRA campaign rally..........

It’s official: Fidel had nothing to do with Justin 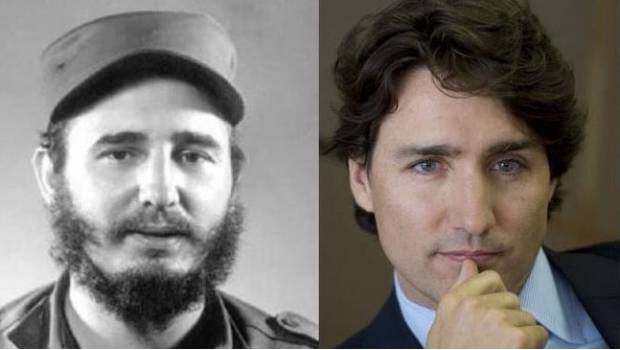 Over the last few weeks, the Canadian media have reached an important conclusion:

In the darker corners of the internet dwells a theory as outlandish as it is compelling: That the real father of Canadian Prime Minister Justin Trudeau is the late Cuban dictator Fidel Castro.
The theory falls apart after only a cursory look at the historical evidence, but it persists for one reason alone: Justin Trudeau’s appearance is strikingly similar to that of the late Cuban dictator.
“Preposterous!” Canadian historian Robert Wright told the National Post.  (He also requested that the word ‘preposterous’ be printed in bold and italic).
Wright’s 2007 book, Three Nights in Havana, is an account of the relationship between Castro and Pierre Trudeau.  While the Trudeaus did indeed develop an unusually cozy relationship with the Cuban dictator, Justin Trudeau was already toilet-trained by the time his mother, Margaret Trudeau, first met Castro in 1976.
“Their biographies just don’t intersect at all,” said Wright.

Like a lot of internet theories, this one will hang around for a while.  They always do.
The story was made a bit more complicated because of another rumor: Fidel Castro’s son committed suicide and allegedly left a note referring to Mr. Trudeau as his half-brother.
So what do we have here?  We have P.M. Trudeau, who does look like Fidel Castro.  And his parents had a cozy relationship with Fidel Castro and spent time down in Cuba.
The rumor is probably not true, but the physical similarity is obviously there!
PS: You can listen to my show (Canto Talk) and follow me on Twitter.

Congratulations to the US women's hockey team........gold medal!