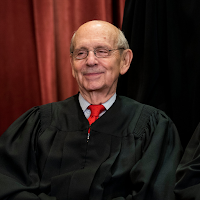 According to news reports, the Justice ain't going nowhere.  On the other hand, maybe Justice Breyer wants to hire a staff for his successor.   This is the report:

Justice Stephen Breyer has hired a full complement of four law clerks for the next Supreme Court term, the court confirmed Friday, in a possible signal that he doesn’t have any immediate plans to retire.

Breyer’s future has been the subject of intense speculation in recent months. Liberal activists are calling on him to retire so President Joe Biden can nominate a successor while the Senate is in Democratic hands.

Breyer, 82, has given no indication he is ready to step down.

So the Justice will break a lot of liberal hearts by sticking around a bit longer.

I wish Justice Breyer well, but the other side probably does not.  They want him out because they believe that their electoral outlook is shaky, i.e. more GOP in 2022 and President (fill the blank) in 2024.  They don't want the nine-member Court to have seven singing from the right!

Beyond Justice Breyer, this once again demonstrates two terrible things:

1) Roe v Wade turned nominations to the Court and the Senate hearings into vicious discussions about abortion.  I hope that Justice Breyer remembers that when one of these state laws come to the Court; and,

2) The Democrats have grown fond of judges doing what they don't have the votes to pass.

Best of luck to the justice.  I hope that he does not follow anyone on Twitter or watches MSNBC because the attacks are going to get really mean.