“La vieja mentirosa”: The story of Hillary and her emails!

(My new Babalu post)
How can this woman run for president?
A new State Department audit came out this week confirming that Mrs Clinton did not play by the rules.
We remind you that Mrs Clinton was Secretary of State during this period.
In other words, this is a case of the boss playing by her own rules, i.e. the Clinton way!
This is part of the report:

The report noted that by the time Clinton took the helm of the department, internal guidance was “considerably more detailed and more sophisticated.”
Yet, the report said, “Secretary Clinton used mobile devices to conduct official business using the personal email account on her private server extensively, as illustrated by the 55,000 pages of material making up the approximately 30,000 emails she provided to the Department in December 2014.” The report said investigators found “no evidence that the Secretary requested or obtained guidance or approval to conduct official business via a personal email account on her private server.”

By any objective standard, she should withdraw her candidacy.  How can a person this reckless about national security be president?
Clinton defenders need to stop defending her and demand her immediate withdrawal.
Politics aside, Mrs Clinton did not play by the rules that the federal government requires of everyone else.
How can someone with such contempt for the rules be the chief executive officer of the US?
What would happen to any head of a company or department if they did not respect the company rules?
What would happen to any government department manager under such circumstances?
We do know that the State Department under Mrs Clinton did dismiss an ambassador for using a private e-mail to conduct the embassy business.
In simple terms, she is disqualified to be president!  It’s time for her supporters to face the facts and move on.  Call VP Biden as soon as you can!
Last, but not least, who kept all of this information from President Obama? Didn’t the IT people at The White House pick up on any of these irregularities?
P.S. You can listen to my show (Canto Talk) and follow me on Twitter.
Tags: Mrs Clinton and her emails  To share or post to your site, click on "Post Link". Please mention / link to the My View by Silvio Canto, Jr. Thanks!
Posted by Silvio Canto, Jr. Post Link ---> 12:30 PM 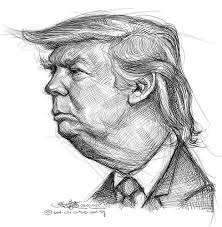 (My new American Thinker post)
A few weeks ago, we lamented that commencement addresses had now turned into political rants.
My good guess is that most families are there to cheer the graduates. We were, when our sons graduated!
There are probably people in the audience of varying political views.
After all, Governor Romney got 61 million votes in 2012 or 48% of the vote. We can safely assume that many of the families sitting in the audience did not do “the hope and change” the last time around.
Nevertheless, the hits just keep on coming, as Larry Lujack used to say when I’d walk home from school listening to WLS in my little radio.
Enter Maria Elena Salinas. She is a national anchor at Univision and not known for any crazy stuff. In fact, she was tough on President Obama in a 2012 Univision appearance.
This week, Miss Salinas decided to hang her anti-Trump trophy:

Some people in the crowd at a graduation ceremony at California State University, Fullerton, shouted at the commencement speaker after she talked about presidential candidate Donald Trump and gave a brief section of her address in Spanish.
“It’s really sad,” the commencement speaker, Maria Elena Salinas, an anchor for Spanish language broadcast network Univision, said Tuesday. “And it’s a testament to what has happened in our country. Our country is really divided.”

“Stupid estupida” that’s all I can say about Maria Elena.
I’m glad that she is worried about someone dividing the country.
Why doesn’t she tell people to stop dividing the country by waving Mexican flags on U.S. soil?
Or call on President Obama to stop going around Congress?
As AT readers know, I’m not a fan of Mr. Trump. At the same, I’m no fan of immigration activists dressed up as journalists either.
Maria Elena’s remarks coincided with the news that the head of Univision has already voted for president:

The chairman of Univision, the largest Spanish language TV network in the United States, is reportedly the single biggest donor to presidential Democratic front-runner Hillary Clinton and her husband former President Bill Clinton.
According to an investigation on Clinton donations by the Washington Post, Haim Saban and his wife Cheryl, a women’s advocate and author, donated $2.4 million to Clinton political campaigns since 1992 — 39 contributions over the past two decades. Separately, the couple also donated at least $10 million to the Clinton Foundation, the investigation shows.

So I trust that the Trump staff knows that they will be running against the Clintons, many in the media and Univision.
P.S. You can listen to my show (Canto Talk) and follow me on Twitter.


Tags: Impeachment in Brazil, corruption in Argentina, property law issues between Cuba and the US To share or post to your site, click on "Post Link". Please mention / link to the My View by Silvio Canto, Jr. Thanks!
Posted by Silvio Canto, Jr. Post Link ---> 12:30 AM