Clinton vs Trump: The freak show is just getting started 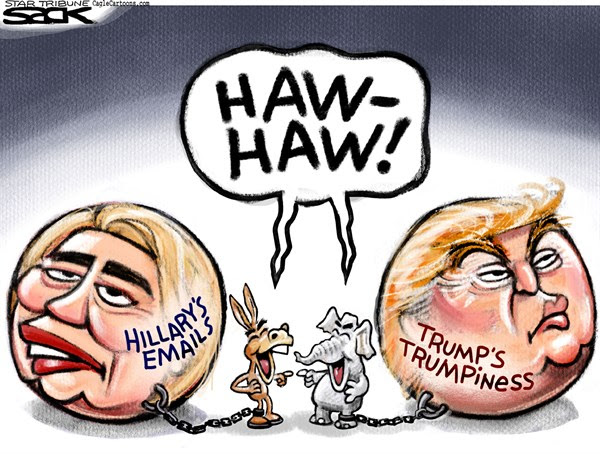 (My new American Thinker post)
What happens when two candidates would rather insult each other than debate issues? The answer is the freak show developing before us. Let’s check a couple of today’s headlines:
1)  The Clinton people admit that they can’t make their candidate exciting. A story in The Washington Postquotes several supporters confessing what we all know. In other words, the lady is boring, such as really boring.
2)  The media is doing exactly what we predicted. The New York Times started by going back and digging up every conversation or contact with women that Mr. Trump has had over the years.
The freak show is off and running and it’s not Memorial Day yet.
It leads many of us to agree with Paul Mirengoff:

Let’s put it this way: the odds of Trump nominating a conservative to the Supreme Court are considerably greater than the odds of Clinton nominating even a centrist.
I have almost six months to weigh these and other considerations and to observe Trump flesh out his positions on key issues, assuming he deigns to do so.
For now, I’m undecided.

So we have 6 months and I will probably vote for Trump because of the Supreme Court. Of course, this is assuming that Mr Trump’s promise to appoint a conservative is not a suggestion subject to making a deal once he becomes president. After all, isn’t everything a negotiation before making the deal?
What a mess. I have voted for every GOP nominee since President Ford in 1976 (even after working for Governor Reagan in the primaries). I voted for these men with pride because I knew that Ford, Reagan, Bush, Dole, Bush, McCain, and Romney were far superior to what the other side was putting up.
Sorry, but this year is different. This is a “freak show”. Maybe God will put a serious person in this campaign that we can vote for and has a chance of becoming # 45.
P.S. You can listen to my show (Canto Talk) and follow me on Twitter.