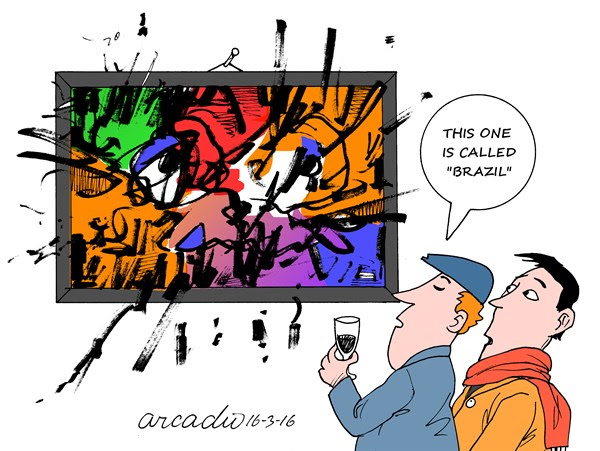 (My new American Thinker post)
José Niño wrote a great post over at Latin American Post, a wonderful website about Latin America.
His article is about the 3 big problems facing most of the countries south of the border. He calls them “the three myths”. They are:
1) Who Creates Wealth?2) “Good Socialism”; and the most important, in my opinion,3) Corruption Is Just A Symptom.
The corruption point really hit the target:

Many analysts and experts mistakenly believe that the rampant corruption that characterizes Latin America is the region’s cause of unrest.
Actually, corruption is just the result of interventionist policies that increase the power and size of the state to lord over people’s needs.
It is easy to talk about corruption, which is merely a symptom of the real disease — an oversized state — without providing an alternative to addressing the existing problem.
When offering a solution, many often refer to government run by enlightened experts or officials.
Crony capitalism and rent-seeking through  privileges granted by the government are the disastrous results of an administration that operates out of its rightful role in society. When a nation exceeds its limitations, that becomes an incentive for businesses to resort to corruption.
Instead of creating commissions or Byzantine bureaucracies to investigate corruption, states must simply strive for the rule of law, repealing all bad legislation so that equality before the law and free competition flourish in society.

Frankly, the real problem with corruption is that most Latin Americans have put up with it. They’ve paid the price of corruption, bribes, for example, in exchange for political stability.
It’s like buying protection from an intrusive state: I pay a bribe and you stay out of my life.
Unfortunately, it has now become a way of life, for example in Brazil, where the cost of corruption is estimated at US$ 53 billion or about 2% of GDP. It also makes it more difficult to encourage foreign investment, such as U.S. companies forced to explain to their shareholders where the money is spent.
It corrupts the police and people can literally buy justice.
In Brazil, they used to say: “Rouba mas faz,” (“He steals, but gets things done”) They are probably saying now that he steals too much and does too little!
Yes, corruption is the biggest threat to growth in Latin America. Clean up crony capitalism and you will see a lot of the region’s problems disappear. Of course, I am also an optimist by nature.
P.S. You can listen to my show (Canto Talk) and follow me on Twitter.
Tags: Corruption is # 1 problem in Latin America  To share or post to your site, click on "Post Link". Please mention / link to the My View by Silvio Canto, Jr. Thanks!
Posted by Silvio Canto, Jr. Post Link ---> 6:30 AM