Monday's video: Ukraine and Russia and your gasoline is going up

The girl is a man 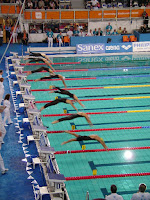 Our insane world has hit woke bottom.  This is from Fox News:

Penn swimmer Lia Thomas came away with wins in the 100 meter and 200-meter freestyle races against Harvard on Saturday.

The victories came days after the NCAA updated its policy for transgender participation and how it will be determined on a sport-by-sport basis.

What did Thomas do?   He, and he is a he, shattered women's records.   Who knows what women were denied scholarships because of this?

The answer is for men to compete with men and women with women.  It's not discrimination.  It's common sense.

Let's give a cheer for Texas for understanding that biology makes boys and girls different.   A few months ago, Governor Greg Abbott signed House Bill 25:

Texas’ transgender student athletes will be restricted from playing on K-12 school sports teams that align with their gender identity under a bill Gov. Greg Abbott signed into law Monday.

House Bill 25, authored by state Rep. Valoree Swanson, R-Spring, will require student athletes who compete in interscholastic competition to play on sports teams that correspond with the sex listed on their birth certificate at or near their time of birth. It is set to go into effect Jan. 18.

The legislation goes further than current rules from the University Interscholastic League, which governs school sports in Texas. Under current UIL rules, a student’s gender is determined by their birth certificate. But UIL also accepts legally modified birth certificates in which someone may have had their sex changed to align with their gender identity.

The Texas approach makes sense.   The NCAA is woke and weak.  The NCAA refuses to go the distance and make a statement to protect young women.  Again, this is not about discrimination.  It's about common sense -- something lacking on the woke side of the world.

We are not talking about T-ball.  This is competitive sports where size and speed matter.   As the uncle of five nieces who participated in high school sports, I think that everyone at the NCAA leadership should resign.