Catholic bishops plus Biden plus Mexican troops to Cancun & North Am leaders 11/18 by Silvio Canto Jr | Politics:
Catholic bishops meet but no decision on President Biden and communion.........Mexican troops to Cancun......North American leaders at White House.....MSNBC and the Kenosha trail.........
and other stories.......click to listen:
Posted by Silvio Canto, Jr. Post Link ---> 7:00 PM

Thursday's video: Why all of the talk about dumping VP Harris? 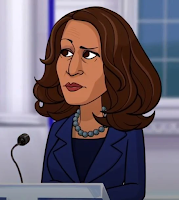 Obama magic not pulling the rabbit out of the hat

As we asked following Virginia and New Jersey: Will any Democrat invite Mr. Obama to campaign for them anymore? The magic is gone or something like that. They are not fainting anymore. Nobody is saying that he walks on water.

Look at this report from South Carolina:

Republican Daniel Rickenmann, a businessman and Columbia city council member, defeated Democrat Tameika Isaac Devine 52% to 48% on Tuesday night in Columbia, which sits in a county that President Biden carried by almost 40 points in 2020.

We remember that it was South Carolina that saved the Biden candidacy 18 months ago.

Maybe the Democrats are not getting the vote today memo. Or maybe there is tremendous apathy in these blue districts.

I don’t know South Carolina that well but I see something similar to what just happened in San Antonio, Texas. Down here, GOP candidate John Lujan defeated Democrat candidate Frank Ramirez in a super blue district.

Maybe it’s a red wave but I think it may be better than that. Victories in blue districts or cities mean that people are finally holding Democrats accountable.