Friday's video:
Ukraine, Taiwan and Iran
Click to watch
P.S.  You can listen to my show (Canto Talk).  If you like our posts, click send drop a dime here.
Posted by Silvio Canto, Jr. Post Link ---> 11:00 AM 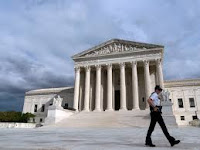 Maybe we finally have the answer to overturning Roe v. Wade.

According to a news report, California has come to the rescue of Roe, or something like that. Check this out:

With more than two dozen states poised to ban abortion if the U.S. Supreme Court gives them the OK next year, California clinics and their allies in the state Legislature on Wednesday revealed a plan to make the state a “sanctuary” for those seeking reproductive care, including possibly paying for travel, lodging and procedures for people from other states.

The California Future of Abortion Council, made up of more than 40 abortion providers and advocacy groups, released a list of 45 recommendations for the state to consider if the high court overturns Roe v. Wade — the 48-year-old decision that forbids states from outlawing abortion.

The recommendations are not just a liberal fantasy. Some of the state’s most important policymakers helped write them, including Toni Atkins, the San Diego Democrat who leads the state Senate and attended multiple meetings.

A sanctuary to terminate life? Our corruption of language continues.

To be fair, this is what happens when you send Roe back to the states. Some states will terminate abortions, others will compromise with some sort of a window, say 15 weeks, and then others will go full Roe. It's the natural outcome of letting voters rather than judges decide.

My guess is that the California plan will never happen because it's too expensive, unless the woman seeking an abortion is willing to pay something. An abortion deductible? Maybe someone in California will sell abortion policies to pay for the practice.

Last, but not least, the article points out that some women from Texas are calling to make abortion appointments. Is that strange or what? People move to Texas to look for a better life and some move to California to terminate one.

We are living in strange times.