We congratulate US workers and employers on Labor Day. The US economy is doing great.... 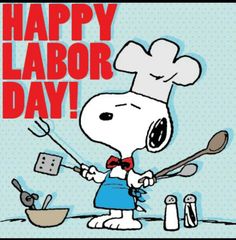 The economy delivered another tough punch to the "doom and gloom" crowd, as we see in this report:


The U.S. economy recorded its strongest economic growth in nearly four years in the three months to the end of June, according to revised figures.
Gross domestic product increased at a 4.2% annualized rate, the commerce department said on Wednesday after revising its second-quarter calculations, establishing the quarter as the strongest in terms of growth since late 2014. Many economists had forecast a downward revision of growth to about 4%.

In fact, things are doing so well that Senator Charles Schumer wants to change how we keep score:  "Senate Democrats want the government to say if GDP growth is helping the middle class"!

Schumer's problem is that the U.S. voter is smarter than he is.

In other words, no politician can tell you that the economy is doing well when it's not or doing poorly when it is growing.

People see it for themselves, from all of the new construction on the way to work to all of the positive talk at the plant.

At some point, "the doom and gloom crowd" need to do the right thing and enjoy a long weekend with the rest of us!

It must be really hard to wake up every morning angry about the 2016 election.  Get over it and enjoy life!

Cheer up "doom and gloomers"! It's a long weekend and you are living in the U.S. Trust me! It does not get any better than this!

A word about the McCain funeral

McCain was a war hero and a consequential politician. Therefore, he deserved a full funeral. Unfortunately, the funeral became about the man who was not invited. It's a shame because I have a lot of respect for McCain and his family.
— Silvio Canto, Jr. (@SCantojr) September 3, 2018

September 2010: Where would the Rangers be without David Murphy?

Welcome to my version of the David Murphy fan club.


He reminds me so much of Rusty Greer, the very talented Rangers' outfielder from the divisional titles of the late 1990s.

Murphy is hitting .287 for the season but .391 in September when the club needed him most to fill Hamilton's shoes.

Last night, Murphy hit a 3-run homer and continued helping the Rangers on the road to an AL West title.

My question for 2011: When is Murphy going to play every day? He deserves it!


In the meantime, Murphy and the Rangers have reduced the magic number to 8.


They play Seattle, LAA and Oakland over the next week.


My bet is that they will clinch the AL West next weekend against the A's!

Like many of you, I have been following the appalling attempt to remove a cross in California.


Last week, I read War Memorials and the Constitution by TED CRUZ AND KELLY SHACKELFORD:

"The Mojave Desert Veterans Memorial, a seven-foot metal cross, was erected in 1934 by World War I veterans to honor their fallen brethren."

Today, the cross is the latest target of the ACLU.


I guess that the ACLU fears that a cross honoring dead soldiers is a threat to our Constitution, or something like that.


Thankfully, Mr. Cruz and Mr. Shackelford are fighting to keep the cross, and other religious symbols, in our public landscape.


This is what they wrote:

"The theory being advanced by the ACLU is that no religious symbol can be allowed on public land.

That is a radical notion that is contrary to the text of the Constitution, to the original understanding of the Framers, and to how the Supreme Court has long interpreted the First Amendment's prohibition on the establishment of a religion.

The Constitution prohibits government from favoring one religion over another, but it does not compel hostility to faith."

We want the cross to stay.


We live in a country founded on Judeo-Christian traditions.


We want to keep it that way!


At the very least, let's remember that this cross was erected to respect the veterans and their sacrifice.

December 2011: They told me that Chavez and "Hollywood-ies" would trash the president if I voted for McCain.....

The "thrill is gone" as someone used to sing.  I think that it was BB King!

The "dream is over" as another person used to say.  I think that it was John Lennon!

"Obama-mania" is now just another hangover!  Just ask the people who voted for him and fell for all of this "hope and change" nonsense.

"Hugo Chávez blasted President Barack Obama as a “clown” and an “embarrassment” who has turned the United States into a “disaster” after Obama criticized Venezuela’s ties with Iran and Cuba, according to a report Tuesday."

You expect this from Chavez.  He said horrible things about Pres Bush.  At the same time, weren't we told that Obama would make everyone love us because he was going to be different?  Didn't he once plan to meet unconditionally with all of these characters to show the world that he wasn't Bush?  How is that "I am not Bush" working out?

Don't blame me.  I voted for McCain!

December 2011: Pres BO's problem is that his fanatical supporters really thought that he "could control the weather"!

Pres Obama has a couple of issues to deal this this week:

1) He told CBS's "60 minutes" that "...I don't control the weather". Pres BO was trying to explain the problems with the US economy.  He was trying to match expectations and results.

2) A new poll indicates that 54% say Obama doesn’t deserve re-election.  (Via Ed M)  Historically, CBS polls have very pro-Dem samples.  This particular poll was of "adults" rather than the more reliable "likely" or "registered' voters.  My point is that the 54% could actually be higher if there was a better sample.

Pres BO's problem is that most of his supporters (or voters) actually thought that he could control the weather and make the impossible possible.

Again, just go back and recall the fanatical reaction and personality cult that was built around his candidacy.

We've speculated over and over about the reasons behind "Fast & Furious", the guns to Mexican cartels scandal.

What exactly was the Obama administration trying to accomplish allowing 2,000 "high powered" weapons to "walk" to the hands of the people killing Mexican soldiers and policemen?

I think that we can finally identify the intentions:  F&F was all about US gun laws rather than helping Mexico fight cartels.

Unlike Pres Bush's Merida Plan, an initiative intended to help Mexico, Pres BO's "F&F" was all about US politics and the left's obsession with curbing our 2nd amendment rights.

CBS has another article about F&F.  It raises the real possibility that F&F was all about sending guns to Mexico and then blaming those Texas gun shops that legally operate here.

In other words, the Obama administration wanted to "fill" Mexico with guns.  They also wanted these guns traceable to Texas gun shops by forcing them to sell to cartel purchasers.  Finally, they wanted to argue that these shops were responsible for the guns in Mexico.

It was rather cynical but the little scheme blew up in their faces.  At the end of the day, they bit more than they could chew.  In other words, there is no way that you control 2,000 guns once they cross the border.

So where are we?

First, we finally have a pretty good idea of the Obama administration's motivation.  It was all about US politics and not about helping Mexico fight cartels.

Second, we have an administration that claims that "lying" and "not telling the truth" are different.   (Clintonian ethics?)

Third, there are lots of people dead south of the border.  Unfortunately, we will hear about a lot more people dying from these guns.

How many people will die from the 2,000 guns that the Obama administration put in the hands of Mexican cartels to pander to the left of the Dem party?  Unfortunately, too many, and most of them will be south of the border.

IBD's editorial is right on:  "These documents show that Fast and Furious was intended not to interdict gun trafficking, but to make the administration's case for more gun control."