The latest from the US-Mexico border with George Rodriguez 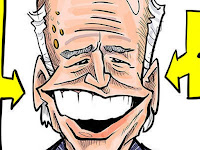 Back in the days of black and white movies, Hollywood released The Invisible Man.  It was the story of Dr. Jack Griffin, a chemist who discovered the secret of invisibility and then went a little crazy.  Sounds like a cool invention, inspired by H.G. Wells, who wrote the book.

Well, let's not say President Biden has discovered any secret except that invisibility is apparently his style as president.  It worked pretty well during the campaign, too!

According to Karl Rove, invisibility is the plan:

They wisely made a decision that let the focus remain on Donald Trump, hide Joe Biden in the basement in Delaware.  And it worked," Rove said.

"I think they've seen since the campaign ended that he's not good at the end of the day and he's not really good on his feet," he added.  "And they may be protecting him, hoping to stave off a further decline in his numbers."

Sounds like a good strategy, but it does not inspire confidence.  After all, we are talking about a man who may get a 3 A.M. phone call about a nuclear attack.

Most of all, it was the news media that irresponsibly allowed this to happen in the campaign.  How do you allow a presidential candidate to say nothing and handpick reporters?

Where is President Biden?  We assume he is in the White House, but we don't see much of him to know one way or another.