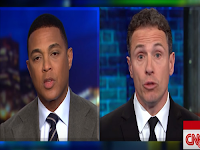 Did you hear the rumor that a 21st-century version of Nilsson's "Without You" is about to be released by a new duo?   Yes, I'm talking about that classic from 1972 that goes like this:

"I can't live, if living is without you

The duo is Chris & Don. You know them as Chris Cuomo and Don Lemon of CNN prime time.

They are singing this song because Chris and Don can't live without Trump.

According to new information from Nielsen Media via Fox News, the three-letter network is having a hard time now that Biden sits in the Oval Office:

CNN’s viewership during the primetime hours of 8-11 p.m. ET dropped 36% since Biden took office after it spiked following Election Day. CNN’s primetime viewership decline was even sharper among the key demographic of adults age 25-to-54, plummeting 47% during the same period.

Let me translate "bete noire": "a person or thing strongly detested or avoided."  In this case, its Chris & Don that audiences are avoiding.

My question is how much longer can CNN's business strategy continue to see losses like this.  In my experience, losing customers, or viewers in this case, means that big changes are coming.

What changes could CNN make?  The only answer is a total makeover with new anchors that can appeal to an audience actually interested in news.