So the border mess is Trump's fault? 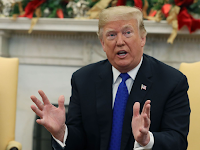 Maybe we shouldn't be surprised.  Doesn't everything end up being Trump's fault?

The latest from the Biden White House is that they inherited a mess on the U.S.-Mexico border.  Again, isn't everything Trump's fault?

As numbers predictably surge again, his Homeland Security secretary, Alejandro Mayorkas, has absurdly called out Trump for having "dismantled our nation's immigration system in its entirety."

Speaker Nancy Pelosi chimed in over the weekend, claiming that "what the administration has inherited is a broken system at the border."

To the contrary, Biden has done the breaking.  The Trump administration had found ways, entirely in keeping with our laws, to turn away illegal immigrants [sic] during the pandemic and to discourage bogus asylum-seekers by making them wait in Mexico while their claims are adjudicated.

Yes, Biden broke it, and he needs to fix it or at least reverse course on the border.

Beyond the "kids on the border," what we have here is a contrast in leadership.  President Trump led by looking out for U.S. interests and enforcing the law.  On the other hand, President Biden has not enforced the law and could not stand up to the immigration activists even in the middle of a pandemic.

So the mess will get messier, and the voters will ask aloud: how is any of this good for me or my family?