The election is in November not today

By the first Tuesday of November, American voters will decide whether to keep President Trump or give former VP Joe Biden a chance.
Can today’s polls tell us anything?   My guess is no, as we saw in this recent reminder from Scott Rasmussen:

In May of 2004, while running for reelection, President George W. Bush’s job approval rating was a few points under the 50% mark. Six months later, when the election arrived, his approval numbers had inched just above the 50% mark and he won just over 50% of the vote.
President Barack Obama’s reelection effort followed exactly the same pattern. For most of his first term, Obama’s approval ratings held steady a few points below 50%. Then, in the final six months leading up to the election, his ratings inched up a few points enabling him to win just over 50% of the vote.

Do you remember the polls showing Mitt Romney beating President Obama or the ones showing several candidates beating President Bush?  I do.
On election day, Americans will look at the two men and ask a couple of questions:
1) Which one of these two guys will be better at rebuilding the economy?
2) Which one of these presidents will be tougher on China?
My prediction is that they will vote for President Trump even if they find his tweet wars with Joe Scarborough as troubling as I do.
P.S.  You can listen to my show (Canto Talk) and follow me on Twitter.
Posted by Silvio Canto, Jr. Post Link ---> 6:20 AM

May 28 and Willie Mays 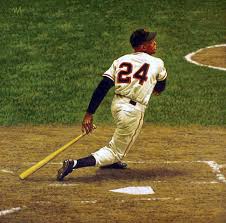 We remember a couple of moments from Willie Mays' career.

Maybe the greatest ever!