Biden should have listened to Cuellar 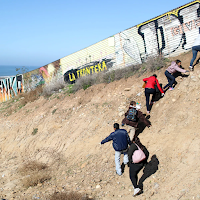 Representative Henry Cuellar's district is right on the border.  He can literally touch Mexico.  Like so many who've grown up down there, Rep. Cuellar understands the area.  He knows that many good people cross over to work and shop.  He also knows that there are criminal elements because he can hear the firefights between the Mexican Army and cartels frequently.

Representative Cuellar apparently warned the Biden administration about opening the border.   He said something that sounds a bit like Trump:

You can’t say ‘don’t come now, come later.’ That’s a bad message. It’s got to be clear and concise. Don’t come in here illegally. That should be the message....”

Don't come here illegally.   Wow.  What an idea!  Have we heard that before?  Gee, I remember when they called you a racist for saying stuff like that.

Let me add this.  Representative Cuellar is a moderate Democrat.  The "wokes" gave him a primary challenge in 2020 but he made it.  Cuellar has to know that his constituents are not happy with this madness on the border.  I hope that Democrats are hearing that.