We will discuss the 2020 elections on Labor Day with Barry Casselman 09/04 by Silvio Canto Jr | Politics:

Friday’s video: Our family found freedom on this day in 1964


Our family found freedom on this day in 1964
Click to watch: pic.twitter.com/bd1YwN7pPL

Cuomo is getting desperate

How are things going, Governor Cuomo?  How desperate are you these days?
We learned that Cuomo said this:

Sounds like a desperate man to me!
Of course, Cuomo is facing the political equivalent of an Aroldis Chapman fastball around your head.
On one hand, New York faces a huge budget deficit of about $30 billion.
On the other hand, the Trump administration is going to cut some federal aid for defunding the police or acting like “anarchist cities.”
My guess is that the one who is going to need a lot of bodyguards is Andrew Cuomo.  He is the one in deep trouble.
PS: You can listen to my show (Canto Talk) and follow me on Twitter.
Posted by Silvio Canto, Jr. Post Link ---> 7:32 AM

Where did the time go?   The answer is that it flew by very fast.
It was on this day in 1964 that our family landed in Miami after a 2 month odyssey that began on July 2nd when we departed Cuba via Mexico City.
Along the way, our plane had mechanical problems landing in Mexico City, we experienced our first “minor” earthquake and then spent almost two months in Jamaica in a one room flat and had some fun too.
Our family left via Mexico City because there were no flights between Cuba and the US in the “pre-freedom flights” era.  Our two options were Madrid and Mexico City.  My parents chose the latter because it was a better fit for our eventual destination or the US.
In Kingston, Jamaica, the five of us spent two months in waiting for our papers to come to the US.
It was a long summer with no money and living “on a wing and a prayer”.
On the day that we landed in Jamaica, we found a room from a local man who had lived in Cuba.     He was like a “guest worker” cutting sugar cane in the island.
We all slept in the same room.  My parents on the bed with my sister stuck in.  My brother & I on the floor.
My biggest memory was staying up late with my father and listening to the news on a little short wave radio that he bought in Mexico.  It was fascinating talking to my father about world events.  He was a very well informed man who had a thought on every topic.
As always, we recall our wonderful parents and their sacrifice.
Another memory was playing “catch” with a ball that my mom made out of a rock and a sock.
We recall our  little sister.  We were all very protective of her because I don’t think that she understood what this trip was all about.
It was an awesome experience that summer of 1964.  Where did the years go?
We lost our father in late 2015.  The 3 of us have our own families and busy lives.
Nevertheless, this is one memory that we will always remember.
P.S. You can listen to my show (Canto Talk) and follow me on Twitter.

1919: President Wilson failed to persuade the public about The League of Nations 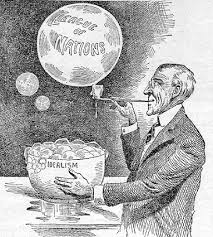 It's important for presidents to make the case for war.  Otherwise, they will lose the public.

What could we learn from President Wilson selling the US public about The League of Nations?  Let's see:


"At a stalemate with Congress, Wilson embarked on an arduous tour across the country to sell the idea of a League of Nations directly to the American people. He argued that isolationism did not work in a world in which violent revolutions and nationalist fervor spilled over national borders. He stressed that the League of Nations embodied American values of self-government and the desire to settle conflicts peacefully, and shared his vision of a future in which the international community could preempt another conflict as devastating as the First World War."

It failed because the country was tired of war.  Also, President Wilson never made the case for post-war engagement.

In the end, the treaty failed and the US entered almost 20 years of isolationism. For years, I listened to Paul Harvey every weekday at 7:30 here in Dallas.    Then there was "The rest of the story" in the afternoons or weekends.   It was some of the best radio ever recorded.   I loved it!

The amazing Mr. Harvey started many years ago.

At the peak of his career, he reached 24 million listeners on 1,200 radio stations plus many over his newspaper column.  Once in Mexico, I picked up his commentary on Armed Forces Radio on short wave radio.