Saturday's show: The Supreme Court & the confirmation fight plus other stories

Saturday's video: The Supreme Court and the red-state Democrats!

Saturday's video:  The Supreme Court and the red state Democrats!

The crazy left is giving Trump lots of free advertising 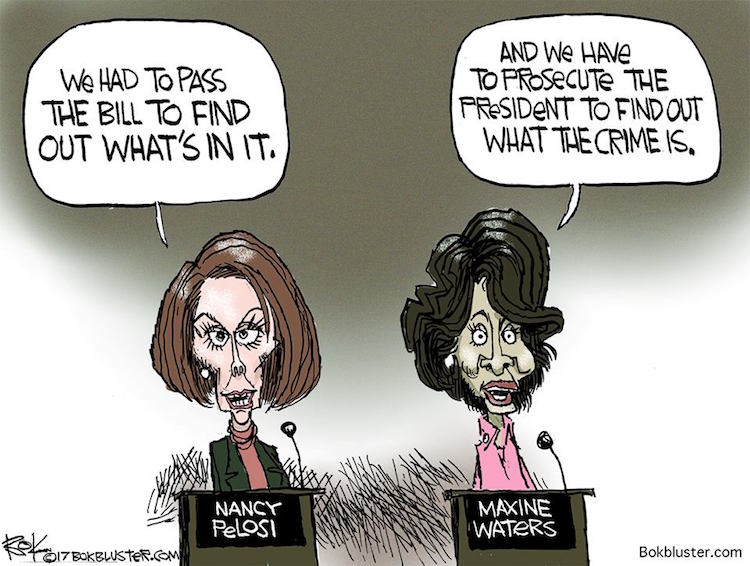 On July 4, Therese Patricia Okoumou chose to use the towering symbol of a welcoming America to protest President Trump’s cruel policies separating asylum-seeking parents from their children.
We couldn’t sympathize more with the cause – or less with how she acted on it, splintering from a group protest under the misguided and viral slogan “Abolish ICE.”
On America’s birthday, Okoumou interrupted thousands in the act of pilgrimage to the Statue of Liberty.  She took an urgent and righteous cause and squandered it on self-indulgent symbolism practically begging misinterpretation that works in Trump’s favor.

It’s all helping President Trump because these immature people can’t do anything serious.
It does not help the activists that the voters are suddenly thinking about immigration.  On top of that, we see that voters do not want to abolish ICE, once again forcing Democrats in competitive elections to answer a question that they’d rather not have to answer.
Yes, the Trump campaign has a new New York spokesperson – that woman hanging from the Statue of Liberty.
PS: You can listen to my show (Canto Talk) and follow me on Twitter.
Posted by Silvio Canto, Jr. Post Link ---> 10:30 PM

Some of us are old enough to remember Travolta's "Saturday Night Fever" and "the pre-Bork days" when judicial confirmations were easy and rather elegant.

They are not anymore and you can blame Roe v Wade, or the decision that legalized abortion in the US.

Before Roe v Wade, abortion was a state matter.  It was decided by voters and legislatures.

And abortion was legal in those places where voters decided to make it legal.

In 1973, The Supreme Court "found" a right to an abortion and we've been in a fist fight ever since.

Again, you can blame abortion and the federal over-reach under Roe v Wade.

Wouldn't it be nice if judicial nominations were serious and without controversy?

It'd be nice but it won't happen anytime soon!

A few years ago, David Brooks wrote something about this in 2006:


"The fact is, the entire country is trapped.Harry Blackmun and his colleagues suppressed that democratic abortion debate the nation needs to have.The poisons have been building ever since.You can complain about the incivility of politics, but you can't stop the escalation of conflict in the middle.You have to kill it at the root.Unless Roe v. Wade is overturned, politics will never get better."

Yes, overturn Roe v Wade and let the states decide and get all of this poison out of judicial nominations.

As I wrote before, Rachel's Vineyard is one of my favorite ministries. They do so much to help women deal with post abortion depression and guilt.

Emily Holman wrote this song to comfort a friend:

"I wrote this song in 2000 for a friend of mine who shared with me her abortion experience from over twenty years earlier.She went through a post abortion bible study at our local crisis pregnancy center and asked me to write a song for the memorial service.I prayed that the Holy Spirit would give me the words to say and He did just that.I feel that this song was truly written and inspired by the Holy Spirit and I have merely been an instrument to spread the message of truth, healing, and hope."

I found this song over the weekend. I hope that you like it as much as I did:


Sometimes I wonder what you would be
And if you’re an angel that’s following me.
What would I see if I looked in your eye
Since all of your hopes and your dreams were denied?
I never knew it was more than a choice


Your heart was beating but you had no voice


An innocent life without a name
I chose to end because of my shame.
But God in his patience waited for me.
Forgiveness and grace He gave freely.
Healing my heart and giving me hope –
Amazing grace He gives.


Sometimes I wonder what the world could be
If eyes were opened and people could see-
There’s only one truth and it’s given to all.


We’re the image of God no matter how small.


He came to the world to give us light


But the world in its darkness preferred the night.
He gave his own life that I should live.


How can I be worthy of such a gift?
As deep as the ocean as wide as the sky
God’s love surrounds me and lifts me high.
I never knew a love like this
God in His mercy forgives.

Sometimes I wonder what I could be
If I opened my heart for others to see
The pain that I’ve hidden from so long ago
What would they think if my secret they would know?
But the way to be free is embrace my cross-
To help someone else who is facing this choice.
For God doesn’t see things the way that we do
His thoughts are higher and His ways are true
God the Father and God the Son
Holy Spirit, three in one


Give me the courage to help someone
God in His mercy forgives.


Amazing grace He gives.
He died so I could live.
Sometimes I wonder"


Great song by Emily Holman. You will find other songs like Emily's at Rachel's Vineyard.