Monday morning and a few political thoughts plus Cowboys

Monday morning and a few political thoughts plus Cowboys:

(My new American Thinker post)
Let’s go back to October 1976. The # 1 song in the country was “Disco Duck“.
On a more serious note, the USSR and Cuba were working together to attack the U.S. in Africa and Central America.
It sure feels like 1976 all over again and I am not talking about dancing ducks.
I mean that Russia, the one we used to call the USSR, is now down in Cuba talking to Raul Castro, the one who is running the island after his brother Fidel had to step aside for health reasons.
We learned this week that the Russians are coming back to Cuba. To be fair, Russia is not going to subsidize Cuba the way that the USSR did from 1962 to 1992. At the same time, Russia is looking for an anti-U.S. angle and they found one in Cuba.
This is from Sputnk News via Capitol Hill Cubans:

Speaking to the paper, Vladimir Karjakin, a professor at the Military University of the Russian Defense Ministry of Defense, suggested that reopening the Lourdes SIGINT facility would significantly improve Russian radio intelligence, whose effectiveness is low compared to that of the U.S.
“In its own time, the intelligence center at Lourdes kept virtually the entire Western Hemisphere in its view, monitoring the U.S. at a depth of several thousand kilometers,” the retired Air Force colonel recalled.

We are not suggesting that this is 1962 when the USSR put missiles in the island. It sure looks like the 1970s when Cuba and the USSR worked together to hurt U.S. interests.
So why didn’t we warn Castro and Cuba? Why didn’t we say that the embassy and trade deals would be cancelled if the Russians discussed opening the intelligence center at Lourdes?
I guess that President Obama really wanted to make that Cuba deal. Just like he really wanted to make that Iran deal.
From Cuba to Iran and now Obama Care, the question is the same: How does this help the people of the U.S.? It doesn’t but that’s for # 45 to worry about.
P.S. You can listen to my show (Canto Talk) and follow me on Twitter. 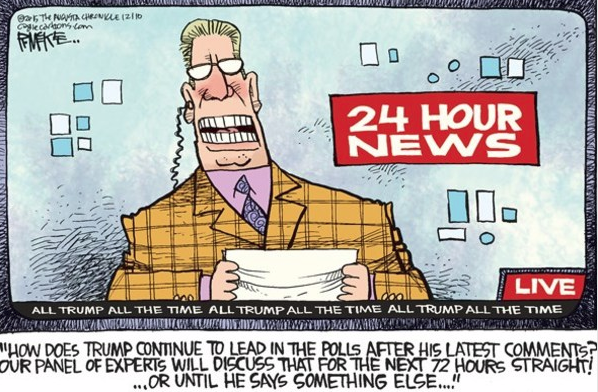 As my readers know, I was not a fan of Donald Trump in the primaries.   I was hoping for a governor, from Gov Bush of Florida to Gov Walker of Wisconsin to Gov Kasich of Ohio to our own Gov Perry of Texas.  Later, I voted for Senator Rubio in Texas because I saw him as the one most electable candidate after so many had dropped out.

My point is that I am not a Trump fan.    Nevertheless, Mr Trump is correct about the way that the media is treating his campaign.

Some of you may have heard about Barry Casselman's post: A Media Coup D'Etat?

It was mentioned by Newt Gingrich at Fox News and ABC News.

It is something that we should all read and here it is:

What we are now witnessing in the 2016 U.S. presidentialelection is an unprecedented media coup d’etat as many ofthe combined media forces (but not all of its members) are attempting to determine the next president before the voting takes place.
I want to make clear that I have not endorsed either HillaryClinton or Donald Trump, and that I have criticized each ofthem on occasions when I thought it was fair and appropriate.I found Mr. Trump’s  recently released video tape comments to be crude and unacceptable, and I found some of Mrs. Clinton’s comments in the release of texts from her speeches to be inappropriate and seriously wrong-headed.
Those are only my opinions, and I know they are not shared in many cases by partisans of each candidate. Nonetheless, I don’t feel it is my job or prerogative to tell my readers how to vote in this election.
Unfortunately, many newspapers, magazines, major and cableTV and radio networks are  choosing to take part in an attemptto influence the outcome of the election way beyond what Ithink are the acceptable standards of the media’s role in apresidential election. To be fair, it is not only the liberal media,but some in the conservative media as well who have joinedinto this endeavor.
This has taken the forms of days and weeks of one-sidedpress coverage (I distinguish that from editorial opinion), hoursof relentless and repetitious broadcasts of the most salacious material about Mr. Trump while downplaying equally serious material from Mrs, Clinton’s hitherto unpublished speeches and e-mails, obviously biased moderators of the TV debates so far, and generally one-sided coverage of the campaign itselfonce the primary/caucus season was concluded, Before that,the media clearly overplayed its coverage of Mr. Trump, and did so mostly uncritically, giving him an unfair advantage against his Republican nomination opponents.
I make a distinction between opinion writing and reportingjournalism. It is understood that some are writing with a partisan point of view. My attention here is directed to thosewho presume to be addressing their readers and audienceswithout unfair bias.
Media bias is nothing new. Polling of reporters show that anoverwhelming majority of them are liberals and Democrats. (Decades ago, it should be noted, most in the media were conservatives and Republicans.) Balanced coverage is perhaps an unrealistic expectation, but the behavior of so many mediainstitutions in 2016 goes beyond mere bias. The front page is not the editorial page. No wonder all polls of public attitudes show trust in the media to be so low.
It is understandable that much of Donald Trump’s manner, andmany of his words, turn off media and establishment elites inboth parties. It is fair to criticize him for his lapses. But HillaryClinton also speaks controversially and has made egregiousmistakes. To try to pretend that she does not have equally lowcredibility is unjustifiable.
Fortunately, the final say in an election rests with the voters.Donald Trump might well lose on November 8 because he wasnot able to persuade enough voters that he should be president.Perhaps he will make a comeback. It is not up to the media, however, to try to predetermine that result by bullying the public into their own way of thinking.
For whatever reason history has presented the Americanelectorate with two such flawed nominees, it is up to the votersto sort this dilemma out on their own.

In the interest of full disclosure, Barry has been on my show often.   He joined me last week to discuss the presidential race and this post.    Listen here!