Let’s hope that Obama throws a better pitch in Havana 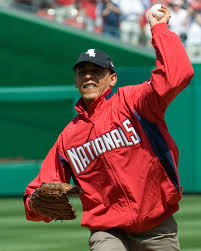 We hear that President Obama will catch an exhibition game in Havana.   The Tampa Bay Rays will visit the island during the president’s visit.      President Obama’s trip is caught up in the middle of a dissident controversy.

The trip will have serious consequences, specially for the future of the US-Cuba relationship.
The Washington Post threw a perfect strike yesterday:

So let’s be clear: Notwithstanding Mr. Obama’s expectation that Cuba will “be fun,” his visit will be an ignoble failure if he does not have a meaningful encounter with the island’s most important human rights activists.
The risk of such an outcome seems to be rising. Administration officials who said Mr. Obama would choose whom he met when he is on the island are now conceding that Cuban officials are trying to prevent him from seeing true opposition leaders. Instead they are proposing that Mr. Obama gather with regime-approved members of “civil society,” perhaps with a couple of moderate government critics mixed in. The disagreement reportedly contributed to a decision by Secretary of State John F. Kerry to cancel a preparatory trip to Havana last week.

We will watch and hope for the best.
In the meantime, I hope that someone else in the Obama delegation throws the first at the game.
P.S. You can listen to my show (Canto Talk) and follow me on Twitter.

El dia de la mujer 2016: There is nothing for women to celebrate in Cuba

(My new Babalu Blog post)
Social media is full of posters and nice thoughts about International Woman’s Day.
My guess is that most people mean well but do not really understand the way that women live in many countries.
In Cuba, women can not vote in a free election, or work for an independent media, or read something other than the official state newspaper or travel freely.
Let’s remember the women of Cuba on a day like this.
P.S. You can listen to my show (Canto Talk) and follow me on Twitter.
Tags: Women in Cuba 2016  To share or post to your site, click on "Post Link". Please mention / link to the My View by Silvio Canto, Jr. Thanks!
Posted by Silvio Canto, Jr. Post Link ---> 4:00 PM

Sanders wins 2 ‐‐ and they say that the GOP has problems

(My new American Thinker post)
It’s easier to talk about the GOP races. More people are voting and the candidates are more diverse and dynamic. Our debates may be loud and lively but they are also very informative.
Frankly, the biggest difference between Mrs. Clinton and Senator Sanders is that the former was born under President Truman and the latter under President Roosevelt.
Another one is that Mr. Sanders was born before Pearl Harbor and Mrs. Clinton after Hiroshima.
Beyond that, they are both liberal and pandering. He panders to white college students and she panders to minorities. This is why she wins South Carolina with black votes and he wins New Hampshire with white voters.
There is a lot of talk about the GOP tearing itself apart, and there is truth to that. However, the Democrats are also in big trouble, as noted in the American Interest:

Consider two stories from yesterday’s papers. The first, in the New York Times, on plummeting turnout in the Democratic primaries:
Democratic turnout has fallen drastically since 2008, the last time the party had a contested primary, with roughly three million fewer Democrats voting in the 15 states that have held caucuses or primaries through Tuesday, according to unofficial election results tallied through Wednesday afternoon.
…Some Democrats now worry that Mrs. Clinton will have difficulty matching the surge in new black, Hispanic and young voters who came to the polls for President Obama in 2008 and 2012.
And the second, in the Washington Post on the latest turn in the ongoing investigation into possible misconduct by the presumptive Democratic nominee:
The Justice Department has granted immunity to a former State Department staffer, who worked on Hillary Clinton’s private email server, as part of a criminal investigation into the possible mishandling of classified information, according to a senior law enforcement official.

Hillary Clinton will be the nominee even if they have to rewrite the rules.
At the same time, I don’t see how she turns on all of those people who voted or will vote for Sanders.
Her choices are awful.
She could go left and call on Senator Warren and run as a liberal ticket. It may please the college kids but cost her more votes in the suburbs and white men.
She could go center-right and look for Senator Kaine from Virginia or that new pro-life governor from Louisiana.
It would balance the ticket but make make the “Sanders-itas” very unhappy.
Does the GOP have problems? Yes we do, and tough ones, to be honest. However, the other side is also in trouble, from ideological differences to few people voting in the primaries.
P.S. You can listen to my show (Canto Talk) and follow me on Twitter.
Tags: Sanders vs Clinton 2016  To share or post to your site, click on "Post Link". Please mention / link to the My View by Silvio Canto, Jr. Thanks!
Posted by Silvio Canto, Jr. Post Link ---> 5:30 AM

President Obama, the dissidents and the trip to Cuba