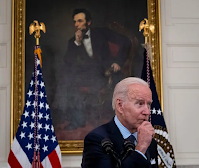 A word about President Biden

For the record, I am not a psychiatrist or expert.  I just see a president of  the U.S. who has to check his 3x5 cards before answering a question about Russia.
Here is the story:

President Biden appeared to check his notes after being confronted by the press on whether Russia was behind a recent ransomware attack while he was shopping inside a store in Traverse City, Michigan, on Saturday.

"With the most recent hack by the Russians, would you say that this means – " a reporter is heard asking about the attack that targeted Miami-based IT software management company Kaseya, before Biden interrupts her to say that they "don't know" yet if it was the Russians.

"I'll be in better shape to talk about it – hold on for one second," Biden said, before taking a piece of paper out of his jacket and putting on a pair of glasses. He said he had just been "briefed" on the hack, but still appeared confused by the inquiry.

Let's be fair.  We don't expect our presidents to be experts.  We do expect them to be on top of their job, specially issues with Russia.  After all, he was not getting a question about Colombia beating Uruguay over the weekend.

In reality, what we are seeing is what happens when the media lets a candidate hide in the basement and does not hold a single press conference.  Yes, candidate Biden did some video interviews but it was always controlled.  Did he ever appear with Chris Wallace on Sunday?   Love or hate Wallace, he would have asked some tough questions, such as ones about his border policies.

None of this happened.  We allowed a man who keeps showing his age to avoid the kind of scrutiny that President Trump got.

This is on the media.  They were obsessed with Trump and forgot that the other guy had a chance of winning and deserved some attention.