The challenges facing leaders in Latin America in 2017 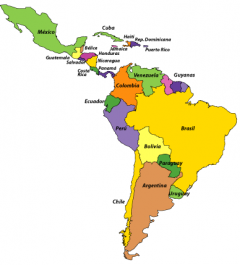 Guest: Fausta Rodriguez Wertz, editor of Fausta's Blog........we will look at the state of leadership in Latin America.........Brazil and corruption........Pena-Nieto in Mexico in a very weak position because of increases in gasoline prices and more violence....more investigations of ex-President Fernandez in Argentina........the future of Raul Castro in Cuba.......Colombia and President Santos after the FARC negotiations.........Venezuela and the collapse of the economy............and other stories......

Tags: Leadership challenges for Latin America leaders, Venezuela and Maduro, Colombia and Santos, Cuba and Raul Castro,  Argentina and Macri, Brazil and corruption, Mexico and Pena-Nieto To share or post to your site, click on "Post Link". Please mention / link to the My View by Silvio Canto, Jr. Thanks!
Posted by Silvio Canto, Jr. Post Link ---> 8:00 PM

(My new American Thinker post)
I have never seen traffic jams like the ones in Mexico City. God forbid that it rains. In case of rain, pack up and go back home because you will literally spend an afternoon sitting in a jam.
My friend Allan Wall travels to Mexico often. He recently summed up traffic in Mexico City this way:

Mexico City’s millions of residents have to get from home to work and other places, and that can be really complicated and congested, with so many people and so many vehicles involved. Thus, traffic in Mexico City is an enormous challenge.
The TomTom traffic index rates Mexico City as the worst in the world, after Istanbul, Turkey.
So how does TomTom rate cities on their traffic? The rating is based on how much extra time is required when there is congestion.
In Mexico City, a trip is 55% longer if the streets aren’t clear. In Paris, France it would be 35%, and in New York City it would be 31%.

Let me add a personal story. A few years ago, I made a business trip and spent some time with a local businessman. I was impressed with his English fluidity and asked him if he had lived in the U.S. He answered no. He said that he learned English commuting to work everyday. He turned his commute into an English class.
Over the years, the Mexico City government has tried this and that.
First, they redirected all major avenues and turned them into one-way streets. It looked good on paper but it did not really fix the problem.
Second, they put thousands of mini-buses to move people around. It worked until the little buses were so crowded that you stood there waiting forever for a ride. To be fair, it is a pretty good system, and cheap. Unfortunately, it’s hard to move 20 million people in any easy manner.
Third, they started a program limiting driving to a few days a week. It was all based on the last digit of your license plate. It was intended to promote “car pooling” but it really didn’t work.
And the congestion is bad for business. And it does not help the pollution problem to have thousands of cars running.
Anyway, the problem is that there are too many cars in Mexico relative to the number of highways and avenues.
It’s possible that Mexico City may have finally found a solution to the problem. It’s sort of like flying over the city, as Victoria Burnett reports:

Coasting above Mexico City’s infernal congestion is normally a prerogative of the well-heeled, who take helicopters or pay to use the upper deck of two-tier highways to avoid the chaos below.
In October, however, thousands of residents of this ragged industrial suburb began getting to work or school in brightly colored pods that glide along the city’s first commuter cable-car route.
The Mexicable, a seven-stop line that runs just over three miles through a furrow of poor hillside neighborhoods, is part of a growing constellation of cable cars around Latin America that links marginalized communities to their cities’ metropolitan hearts.
In Ecatepec, the largest and most dangerous municipality in the 21 million-strong expanse of greater Mexico City, the Mexicable has brought new visitors, shorter commutes, a burst of street art and a new sense of inclusion in city life, residents said.

The idea is fabulous. Allan Wall mentioned that you can move at 15 kilometers per hour or twice the average Mexico City traffic speed of 8 kilometers per hour.
There are other cities in Latin America with similar systems, including Cali and Medellín in Colombia, Caracas, Venezuela, La Paz, Bolivia; and Rio de Janeiro in Brazil. There are plans for half a dozen other Latin American cities,
Flying over the traffic? Quite an idea for a city that is so congested that most people never leave their neighborhoods.
P.S. You can listen to my show (Canto Talk) and follow me on Twitter.
Tags: Traffic in Mexico City To share or post to your site, click on "Post Link". Please mention / link to the My View by Silvio Canto, Jr. Thanks!
Posted by Silvio Canto, Jr. Post Link ---> 7:30 AM