Monday’s video:
Should President Trump give political speeches?
Click to watch:
P.S.  You can listen to my show (Canto Talk).  If you like our posts, click send, and drop a dime here.
Posted by Silvio Canto, Jr. Post Link ---> 12:00 PM

Joe talks and it's over for the Biden agenda 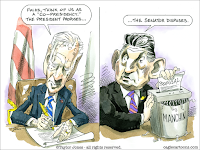 Over the last few months, Senator Joe Manchin has been the talk of Washington.  He represents West Virginia, a state that President Trump carried by over 35 points.   Over the weekend, Senator Manchin dropped a bomb confirming that he was out on both federalizing elections and the filibuster.   This is what he wrote:

The truth, I would argue, is that voting and election reform that is done in a partisan manner will all but ensure partisan divisions continue to deepen.    With that in mind, some Democrats have again proposed eliminating the Senate filibuster rule in order to pass the For the People Act with only Democratic support. They’ve attempted to demonize the filibuster and conveniently ignore how it has been critical to protecting the rights of Democrats in the past.

So goodbye Biden Agenda and hello headaches for Majority Leader Chuck Schumer.  The left will now get even crazier and call on Senate Democrats to do whatever is necessary to go around the filibuster.

To be honest, it did not take a lot of courage for a U.S. senator from Virginia to oppose the Democrat left.  Nevertheless, Senator Manchin did the right thing in opposing the more extreme agenda.