The Hispanic vote in 2016 with Israel Ortega

Get ready for more spin after this lousy jobs report 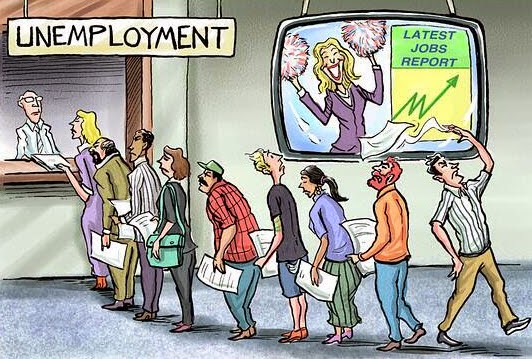 It must be Friday because we got another lousy jobs report.

It goes like this and another indictment of President Obama's policies:

The U.S. economy created the fewest number of jobs in more than five years in May, hurt by a strike by Verizon workers and a fall in goods producing employment, pointing to labor market weakness that could make it difficult for the Federal Reserve to raise interest rates.

A fall in "goods producing employment"?   Can someone speak English please?  In my neighborhood they would call it "a lousy business environment"!

And the report also tells us that there is no sign of meaningful wage growth!   Did Americans need a report from economists to figure that one out?

The jobs report came about 24 hours after President Obama visited Indiana to celebrate the economy.   He whipped up his administration's contributions to the state's recovery but conveniently overlooked some rather important facts:  cheap gas promoting recreational vehicle sales and an state run by people who've rejected Obamaeconomics, from high taxes to mindless regulations.

And President Obama missed a big one:   Indiana is a right to work state!

It'd be interesting to see how Mrs Clinton reacts to this report.   We know how Senator Sanders will react.   He will likely say that the new 4.7% unemployment rate is phony.    And Mr Trump will probably say that 38,000 new jobs is not huge!

We are also anxious to hear what the Obama White House says about it.   My guess is that they will issue a follow up letter on transgender rights and school bathrooms.    After all, don't they know best about everything?

The Mexican flag is back on US soil and we don’t mean the one at the Mexican embassy, regional consulates or maybe a Cinco de Mayo celebration.
We mean protesters waving the Mexican flag to show their opposition to a US presidential election.
It reminds many of us of the immigration marches of a few years ago!  It turned off Americans back then and this will turn off voters again.
As a naturalized US citizen, who actually supports a “work visa” program for some people in the country illegally, I find these scenes of Mexican flags rather sick.
As a practical matter, every Mexican flag or riot is worth a million votes to Mr Trump.    It simply makes his point that there are too many people here who don’t understand immigration laws.
Back in 2002, some American students legally in Mexico decided to participate in a political demonstration about a new international airport outside of Mexico City. The students decided to join the environmentalists opposed to the construction of the airport.
What happened to these students? Let’s hear from Heather McDonald and her 2006 article:

What would Mexico do? The answer is easy: deport them on the spot. In 2002, a dozen American college students, in Mexico legally, participated peacefully in an environmental protest against a planned airport outside of Mexico City. They swiftly found themselves deported as law-breakers for interfering in Mexico’s internal affairs.
If Mexico was willing to strip these students of their duly-obtained travel visas, imagine what it would have done had the students broken into the country surreptitiously—not just summary deportation but undoubtedly howls of complaint to the U.S. government for winking at this double violation of Mexican sovereignty.

Yes, Mexican law is correct that immigration policy is about sovereignty.
Why isn’t the media asking Mrs Clinton or Senator Sanders about these Mexican flags or the violence?
It is pathetic what we are watching in the US!
I can guarantee you that Mexico would not tolerate anything like this on its soil.   They would scream sovereignty!
It’s a shame that no one in the Democrat Party will defend sovereignty north of the border.
P.S. You can listen to my show (Canto Talk) and follow me on Twitter.
Tags: Mexican flags in US political rallies  To share or post to your site, click on "Post Link". Please mention / link to the My View by Silvio Canto, Jr. Thanks!
Posted by Silvio Canto, Jr. Post Link ---> 12:30 AM