The week in review with Bill Katz the editor of Urgent Agenda 02/24 by Silvio Canto Jr | Politics:


Guest: Bill Katz, the editor of Urgent Agenda....The week that Bloomberg joined the debate and Sanders won Nevada...Panic over Sanders on Dem side....Trump building cash reserve for re-election..Trump in India.and other stories.....
click to listen:

Monday’s video: Freaking out over Sanders....

Monday’s video:
Freaking out over Sanders....
Click to watch:

1996: Another anniversary of the shooting of the "Brothers to the rescue" 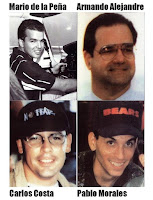 We remember today the 20th anniversary of the murder of 4 men of the group "Brothers to the rescue".     The men were Carlos Costa, Pablo Morales, Mario de la Pena and Armando Alejendre, Jr.     We remember the four men and their families.
We remind you that President Obama will soon be shaking hands with Raul Castro, the man who ordered a Cuban MIG to shoot down their plane.

To Trump Derangement Syndrome, the three-year malady that has relegated the left to a world of its own collective insanity, we can add SDS – Sanders Derangement Syndrome, the same form of dementia applied to one of their own, the inimitable Bernie Sanders.
The first victim of SDS is Chris Matthews, who looks like a man who has lost his famous hardball.
With respect to the Nevada results, this is what he said:

I was reading last night about the fall of France in the summer of 1940, and the general, Renault, calls up Churchill and says, ‘It’s over.’ And Churchill says ‘How can it be? You’ve got the greatest army in Europe. How can it be over?’ He said, ‘It’s over.’

Wait, it got better.  Check this one out:

“I’m wondering whether the Democratic moderates want Bernie Sanders to be president,” he said. “That’s maybe too exciting a question to raise. They don’t like Trump at all. Do they want Bernie Sanders to take over the Democratic Party in perpetuity? I mean, he takes it over, he sets the direction of the future of the party — maybe they’d rather wait four years and put in a Democrat that they like.”

Comparisons to World War II are always stupid and insulting to the thousands who died to fight Hitler and Japan.  After all, we just finished celebrating the 75th anniversary of many of those battles.
Hoping that a Trump victory will lead to rebuilding the Democrats will mean that President Trump will put more judges in the federal judiciary and potentially the Supreme Court.  How is that good for Democrats?
Matthews needs to look at himself in the mirror and see the problem.  The left has spent three years demonizing President Trump and now must deal with all of the hatred and insanity that they’ve unleashed. How long will they do the same with Sanders?
PS: You can listen to my show (Canto Talk) and follow me on Twitter.
Posted by Silvio Canto, Jr. Post Link ---> 6:33 AM

So has Bernie Sanders joined the Democrat Party or is he still an independent from Vermont?
— Silvio Canto, Jr. (@SCantojr) February 24, 2020

Then Bloomberg will tear up Sanders by showing all those “commie” videos and explaining that his numbers don’t add up. Sanders will fight back, saying Bloomberg wants to buy the election and so on.
The loser will be the Democrats, who will never reconcile their huge differences.
— Silvio Canto, Jr. (@SCantojr) February 23, 2020

Then Bloomberg will tear up Sanders by showing all those “commie” videos and explaining that his numbers don’t add up. Sanders will fight back, saying Bloomberg wants to buy the election and so on.
The loser will be the Democrats, who will never reconcile their huge differences.
— Silvio Canto, Jr. (@SCantojr) February 23, 2020

Senator Sanders and Mr. Bloomberg may be the only two with any cash in the bank to move on after Super Tuesday.
— Silvio Canto, Jr. (@SCantojr) February 22, 2020

1996: A deadly weekend for US citizens over international waters

In Miami, and other Cuban American communities across the U.S., we will remember this weekend the anniversary of the shooting of four Cuban-Americans over the Florida Straits.

Two small planes operated by a Cuban-American group were shot down by Cuban fighters over the waters north of Havana and the four people on board were missing, President Clinton and the U.S. Coast Guard said Saturday.Clinton said he had been briefed on “the shooting down Saturday in broad daylight of two American civilian airplanes by Cuban military aircraft.”“I condemn this action in the strongest possible terms,” Clinton told reporters in Seattle, Washington.The two planes with four people on board were twin-engine Cessna aircraft operated by the group “Brothers to the Rescue,” a Miami-based group of Cuban exiles funded by private donations. The group has flown hundreds of missions to spot Cuban rafters attempting to flee their island nations.Group founder Jose Basulto was on a third plane that escaped the gunfire and returned to Miami.Basulto said all three planes had radioed Cuban air traffic controllers to identify themselves and report their intentions to search international waters for Cuban refugees who may be on rafts.Basulto described seeing two Cuban MiG fighters approach them while they were at least 20 miles north of the Cuban coast, 8 miles into international waters. Shortly after that, he lost radio contact with the other two Cessnas.“I kept calling them both and heard no answer,” Basulto said. “At that time we decided to proceed north and go into the clouds for cover, because we feared that something dreadful had happened.”

…pledged Monday to work with Congress to pass the so-called Helms-Burton legislation which would tighten the existing U.S. embargo against Cuba.The president said he would ask Congress to permit him to use some of the approximately $100 million in frozen Cuban assets in the U.S. to compensate the families of the four missing Cuban-American pilots and crew members.Clinton also announced additional punitive measures, among them:tighter restrictions on the movement of Cuban officials in the United States; efforts to increase funding to help the U.S. government’s Radio Marti overcome Cuba’s jamming of its broadcasts; suspension of all commercial charter flights between the U.S. and Cuba.

This incident was a low point in U.S.-Cuba relations. The U.S.-registered aircraft were destroyed while looking for rafters in international waters. Cuba had no reason to shoot down planes on a humanitarian mission.
Furthermore, Cuba has never taken responsibility for this lawless action.
Nevertheless, a U.S. flag now flies in Cuba, not far from where dissidents continue to be arrested.
And no one reminded President Obama that Cuba has never fulfilled the requirements that the U.S. Congress imposed after the shooting. Then again, did he ever care about the law?
What happens when a hostile country shoots U.S. citizens on a humanitarian mission? I guess that you reestablish relations and don’t demand accountability.
P.S. You can listen to my show (Canto Talk).
Read more: http://www.americanthinker.com/blog/2017/02/1996_a_deadly_weekend_for_us_citizens_over_international_waters.html#ixzz4ZhNcGfEV
Follow us: @AmericanThinker on Twitter | AmericanThinker on Facebook