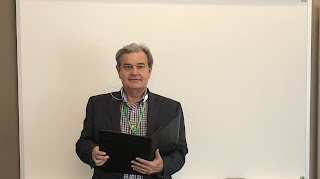 Why should people out of power have clearances, anyway?

Years ago, I remember hearing the story of President Nixon’s final flight from the White House to California. The President took off on Air Force One but it changed to a military flight as soon as President Ford was sworn in.   In other words, the president of the US was no longer on board!
The principle is that when it comes to matters of state, once you’re out, you’re out.
Put me down as someone who does not understand why former Obama officials have security clearances anyway.  Why do we do that?  You are either in or out, or so I understood.
President Trump should pull the security clearances.  It’s even more imperative given that many of these Obama officials are now partisan commentators, as Jim Hanson points out:

There is a longstanding tradition of granting former officials continued clearance to allow them to be consulted about actions they took and insights they might have. There is no requirement to do this but when all, regardless of party affiliation, are supposed to be working toward our security it provided a continuity of the institutional knowledge. That is no longer the case with these individuals.

The article points out one example:

John Brennan has become increasingly unhinged and has called President Trump treasonous. How can he be allowed anywhere near the inner workings of the Trump administration as it works to conduct our nation’s foreign policy? Another person likely to lose his clearance is Former CIA Director Michael Hayden who publicly warned people not to work for President Trump. That is not compatible with offering any kind of help at all to that same administration.

Does anyone seriously think that President Trump would consult Mr. Brennan for anything?  I don’t think so.
Frankly, it’s dangerous to have a man like Mr. Brennan looking at information that he will could leak to a friendly reporter.
So let future presidents make the call.  At the same time, a former official who is now calling the president a “traitor” is not someone who merits a clearance.
P.S. You can listen to my show (Canto Talk) and follow me on Twitter.

The Rockies will play the Red Sox in the 2007 World Series. Let me make the easy call and predict a Boston victory. We will review my decision with our friend Paul Greco. However, let me add that the Rockies as hot as any team in post-season history. I won't be shocked if the Rockies manage to win this series!


Second, our friend Don Surber will give us some insight into the Clinton "dishwashers". Where did the Clintons find so many dishwashers with so much cash and interest in politics? I guess that's the big question!


Last, my friend, Jerome Bailey, will give us a personal report from Los Angeles.

January 2008: A chat with Jeff Jacoby

Jeff Jacoby spoke with us today. He reminded us of the ongoing mistreatment of women in the Muslim world:

"By Western standards, the subjugation of women by Muslim fanatics, and the sometimes pathological Islamist obsession with female sexuality, are unthinkable." (The Islamist war on Muslim women)

Right on. We also spoke about Dr. Biscet (A hero in Castro's gulag) and the US presidential primaries.

"The Russia Hoax" by ox News legal analyst Gregg Jarrett is out!

Over the last few days, I've heard a couple of interviews with Greg Jarrett.

Let me read the book for additional comments but Mr. Garrett made a strong case during the interviews that this whole story is a "hoax":

August 2007: The Daily Kos can't survive without its nasty posts!

To be fair, every blogger gets posts with nasty language. I get some comments but I don't publish them. At the same time, I don't get thousands of them like more popular blogs.


Once in a while, a good blog is going to publish something nasty. It's part of the business. However, Rick Moran is right about The Daily Kos:

"The problem for the proprietor, Markos Moulitsas Zuniga, is that so much of his readership is immersed in this conspiracy culture that eliminating it would drive a significant portion of them away. He is well and truly trapped by his own success."

In simple terms, Kos makes enough money to hire a full time moderator to keep the "four letter words" and the "Cheney should be dead" stuff away.

More from the insane asylum known as today's Democrat Party..........

Are you ready for a really crazy headline?  Try this: "DEMOCRAT SENATORS WON’T MEET WITH KAVANAUGH"!

This is not what "advice and consent" is about.

This is more like the worst of partisan politics, or turning every Trump nomination into a debate about the last election.

For the record, the GOP Senators did not do this to the Obama or Clinton nominees.

And finally, how is this immaturity showing respect for the citizens in their states who voted for Trump?   Didn't he carry about 30 states?


"The A’s rallied for three runs in the seventh, four in the eighth, one in the ninth to tie it and three in the 10th to win it.
The Rangers, meanwhile, didn’t have another hit after Andrus’ slam."

It was a great 7 innings for the local team!

What's going on? I don't recall another season in recent memory with a similar situation.

More than likely, some of these teams will cool off or play better in the last two months.    Nevertheless, such lack of parity is bad for the game.