Friday’s video: The first economic jolt hit the US....

Are Mexicans tuning out Lopez-Obrador?

Social media is alive and well these days.  I’ve had several chats with friends and contacts in Mexico and learned this:  Mexicans are scared that President Andres Lopez-Obrador is more into “abrazos” (or embraces) than getting serious about “el Corona” as they call it down there.
The problem is that Mexicans watch a lot of U.S. TV and know everything happening up here.  They also talk constantly with families and friends sitting at home in the U.S.  They hear about our problems and wonder if their president is in denial.
A few days ago, U.S. Ambassador Christopher Landau told U.S. citizens to go home, if possible. This is from Pulse News Mexico, an English virtual newspaper based in Mexico City:

More than 2,000 people tuned in to hear the ambassador respond to Covid-19 questions regarding everything from medical coverage to visa extensions.
Addressing each of 16 questions posed by participating U.S. citizens, Landau made it clear that any U.S. citizen, whether tourist or immigrant to Mexico, who did not return immediately to the United States should be “ready to ride out the Covid-19 pandemic here in Mexico.”
“Do not rely on the U.S. government to help you get home,” he said.
“Book a commercial flight while they are available.”
The ambassador also reminded Americans that most U.S. health insurance — including Medicare and Medicaid — do not cover hospitalizations and medical costs outside the United States, and many travel insurances do not include repatriation costs via an air ambulance, which can run into the 100,000s of dollars.

“Go home” is Ambassador Landau’s message.  Let’s hope that they can!
On another front, most of the Mexicans that I’ve chatted are following President Trump’s “stay home order” rather than working.  Many are working from home as well.  Mothers are keeping their kids at home.  Some colleges are on going on line.
My unofficial assessment is that Mexicans know that they have “el problema Corona” even if their president does not.  In fact, a friend here in Dallas who is a strong “AMLO supporter” is disappointed that her president has been so slow.
Finally, several friends have assured me that Mexico’s official numbers, the 363 cases and 6 deaths reported so far, are not real.
What are Mexico’s numbers?  Nobody knows, but it’s more than reported, or so everyone tells me.
P.S.  You can listen to my show (Canto Talk) and follow me on Twitter.
Posted by Silvio Canto, Jr. Post Link ---> 6:23 AM

I spoke with John Batchelor about "Cubanos in Wisconsin".  It was a very enjoyable chat.

Listen to the show:

2013: "Cubanos in Wisconsin" interview with KATH Radio in Dallas 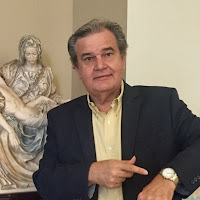 Over the last two weeks, we've been promoting the show on my show, Radio Marti and now KATH in Dallas.  The book is about family and freedom.

This is my interview with Dave Palmer of KATH in Dallas:

Krauthammer turned out to be right about Obama and Cuba

As you may remember, President Obama visited Cuba four years ago.

We remember this response from the late Dr. Charles Krauthammer.  This is what he said:


Cuba wasn’t so much a legacy trip as a vanity trip, vindicating the dorm-room enthusiasms of one’s student days when the Sandinistas were cool, revolution was king and every other friend had a dog named Che

Needless to say, the Cuban people would have been better off if President Obama had listened to Dr. Krauthammer before meeting with Raul Castro.
PS: You can listen to my show (Canto Talk) and follow me on Twitter.
Posted by Silvio Canto, Jr. Post Link ---> 12:11 AM