We will look the Olympics TV coverage and the little sister from North Korea......Jim Mussina cracks a joke about killing posters and no one said a thing........the US Senate starts the DACA debate......Abraham Lincoln 1809......and other stories...........

A word about the little sister from the North and so much media attention. She is the brutal dictator’s little sister and we should remind everyone of the crimes committed in NK....and this is another February 12th and we remember President Lincoln......

What if a Republican had said shoot the pollsters?

Wow! It must have been a great moment over at MSNBC. This is what happened:

Jim Messina, a former campaign manager for Barack Obama, apparently isn’t one to mince words.
During an appearance Friday on MSNBC’s “Morning Joe,” Messina spoke about the irrelevance of public polls so early in an election year, Mediaite reported.
Then he underscored the point to host Joe Scarborough.
“Joe, you know how I feel about public polls,” he said. “I think all public pollsters should be shot.”
Messina said there were other, more important yardsticks at this point to determine a candidate’s viability.

Messina was obviously joking. At least, I don’t think that he was threatening the pollsters. Nevertheless, it raises two important points:
1) What if President-elect Trump had same thing about all of the pollsters who got his election wrong? He had a good case since the so called experts were giving Mrs. Clinton the election for weeks. And,
2) What if Roy Moore or anyone else had said something like that?
My point is that any GOP candidate or politician who said anything about killing pollsters would have been fried in the media. CNN would probably be doing segments about our political rhetoric. MSNBC would be doing interviews with victims of crime claiming that the Republican words were insensitive and just further evidence of the NRA’s hold on the party.
Messina is going to get a very tame, if any coverage, compared to what any GOP or conservative would have gotten.
P.S. You can listen to my show (Canto Talk) and follow me on Twitter.

Does your wife need another reason to buy shoes? 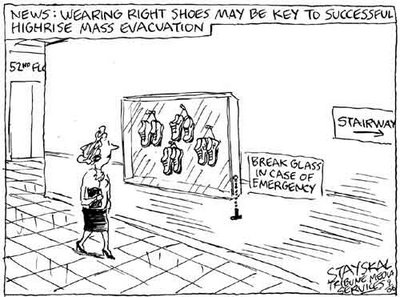 OK guys. Get ready for this one.

How many reasons does a woman need to buy shoes?

The latest one is the war on terror!

A few days ago, I was looking through some papers and found this article from 2006.  It appeared in The LA Times entitled  “From the Ground Up, Cuba Is Crumbling“:

“Cuba is falling apart — literally.Even as its economy booms thanks to a thriving tourism industry, brisk nickel exports and cheap oil from ideologically aligned Venezuela, the social benefits are difficult to see at street level.Except for a few high-profile historical restoration projects such as the Art Deco buildings of Old Havana, the country’s structural decay seems to worsen with each month.”

2006 was the year that Cuba moved from Fidel to Raul Castro.   Not much changed beyond that!
P.S. You can listen to my show (Canto Talk) and follow me on Twitter.

The fence that Mexico wants! 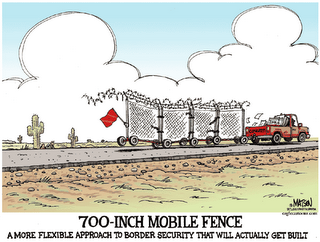 Here is an idea:

2) let President Pena-Nieto drive the truck, hire the workers and print the guides so that people can get around the fence!
Posted by Silvio Canto, Jr. Post Link ---> 8:30 PM