A chat with Michael Bargo about abortion & other stories

Thursday’s video: Who gave what info to President Biden?:

Thursday’s video:
Who gave what info to President Biden?
Click to watch:
P.S.  You can listen to my show (Canto Talk).  If you like our posts, click send, and drop a dime here.
Posted by Silvio Canto, Jr. Post Link ---> 10:00 AM

Maybe we don't all eat 'huevos rancheros' for breakfast 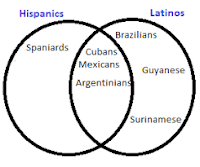 As a Cuban who grew up in the U.S., I've learned how different Hispanics are.  For example, Mexicans eat "huevos rancheros" for breakfast and Cubans eat "tortilla de huevos."  They are both eggs but with a different name and sauce.  Someone from El Salvador eats "popusa," but his Mexican friend at the plant has tacos in his lunch box.  I recently attended a program on Argentina food and it was incredible.

It's amazing how we eat different things that reflect our very different histories.  I won't even mention "5 de Mayo" because no one in Mexico actually celebrates that the way we do.  It's amazing!

Over the years, I've argued that Democrats do not understand that Hispanics differ, from our place of origin to whether we live in cities or suburbs.

Last week, an article in Texas Monthly confirms that we are indeed different and Democrats may be learning it the hard way.  In other words, calling Trump a racist or engaging in pathetic demagoguery over an election law did not work as planned.

This is from Texas Monthly:

South Texas lately has become an object of political fascination for pundits, some of whom have not taken the time to understand even the most basic facts about the region. Until recently, officials from McAllen typically found themselves on the national radar only when they welcomed visiting national politicians. But Villalobos’s win—albeit in a race in which his party affiliation did not appear alongside his name on the ballot and fewer than 10,000 of the city’s 73,000 registered voters went to the polls—was noteworthy for one reason.

It seemed to confirm what Democrats had spent the past seven months denying: they have a deep problem in South Texas -- and therefore in statewide races as well.

The problem was seen in Arlington and Ft. Worth in North Texas, or what we call the Metroplex, where GOP candidates were elected in two cities with significant Hispanic populations.  They won comfortably, as we posted here a few months ago.   Democrat candidates learned that Hispanics are not into defunding the police either.

What we saw in those huge Texas cities is that Hispanics are maturing and moving beyond being a group that just talks about immigration or DACA.

So far the Texas Democrats are avoiding the aforementioned trends or living inside the bubble.   It reminds me of one of my late mother's favorite phrases whenever I did not see reality.  She would say in Spanish "abre la ventana y veras que esta lloviendo:" open the window and you'll see that it's raining.

It looks like many Democrats don't want to open the window and see that it's raining on their parade.