Thursday's show: The Mueller probe under fire, Alabama now and other stories

The problem with Roy Moore

Like some of you, I thought that Judge Moore would pull this out because he was running in Alabama. Unfortunately, even a flawed GOP candidate can lose in Alabama.
What does it mean going forward?
In politics, the winners always explain victories in grand terms. We heard Jones last night speak in terms of “change” and other things.
In fact, senator-elect Jones had very little to do with his victory. It was a referendum on Roy Moore, a very flawed candidate whose problems pre-dated The Washington Post article.
Doug Schoen has it about right in his analysis:

Surely, Jones’ win emboldens Democrats to compete in states like Nevada where Republicans are potentially now vulnerable. To succeed, the Democrats will need more than a message of resistance or opposition, but a centrist pro-growth agenda of their own.

Mr. Schoen has a warning for both parties, as well. I agree that the GOP needs to get more practical and choose candidates who can win elections not primaries.
The good news is that the GOP has put the Moore problem away. In other words, no Moore circus or questions about an ethics investigation or more newspaper articles clarifying where he did or didn’t touch young women. Moore is history and that’s a blessing for Republicans who would rather talk about the tax plan.The bad news is for Alabama and Senator elect Jones. In the summer, Jones was nominated because no one in their right mind thought that he’d win. He is the kind of liberal who usually makes concession speeches in Alabama.
So how popular will Senator Jones be in a few months? Not very and that’s what we will be talking about in 2018 until he is defeated in 2020.
In elections, candidates matter a lot. A flawed candidate usually loses, as we saw with Clinton and Moore.
P.S. You can listen to my show (Canto Talk) and follow me on Twitter. 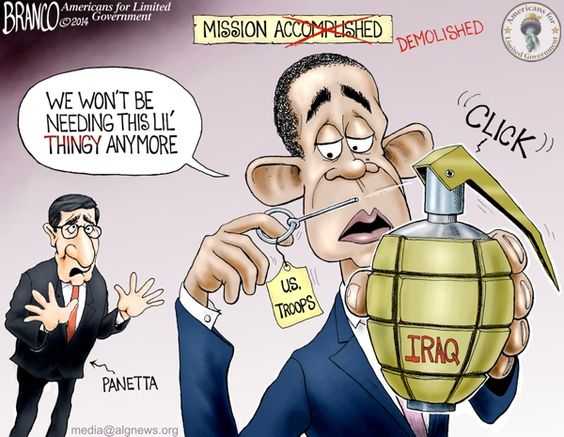 Back in 2007,  many Democrats were calling for a withdrawal from Iraq.  They did it by playing both sides of the issue.   It was very dangerous talk, as we learned after President Obama withdrew the troops from Iraq in 2011.

Go back and read this from CNN's Michael Ware:


"Well, even more than that, if you just wanted to look at it purely in terms of American national interest, if U.S. troops leave now, you’re giving Iraq to Iran, a member of President Bush’s ‘Axis of Evil,’ and al Qaeda.
That’s who will own it.
And so, coming back now, I’m struck by the nature of the debate on Capitol Hill, how delusional it is.
Whether you’re for this war, or against it; whether you’ve supported the way it’s been executed, or not; it doesn’t matter.
You’ve broke it, you’ve got to fix it now. You can’t leave, or it’s going to come and blow back on America."

We knew what it would happen following a premature withdrawal.   And it did happen!
Posted by Silvio Canto, Jr. Post Link ---> 1:30 AM