Monday's show: Watergate plus 47 plus Beto getting desperate & be weary of early polls

Watergate plus 47 plus Beto getting desperate & be weary of early polls 06/17 by Silvio Canto Jr | Politics:

Monday’s video: We remember Watergate or the burglary that started it all......47 years ago in 1972!

Beto getting a little desesperado…. 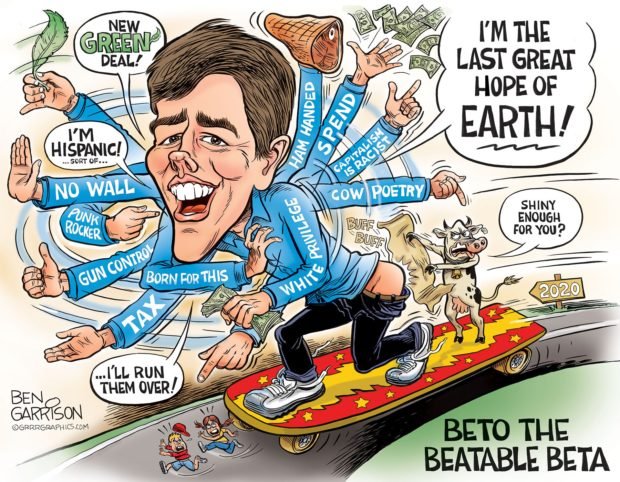 On a scale of 1 to 10, let’s call this one a super act of desperation. How else do you explain a human being saying that he will make it easier for boys who thinks they are girls to compete with real girls?
In another time, the Democrats would have politely asked that person to register as something else rather than a “D.”
According to news reports, Beto O’Rourke has decided to stroke the extreme left wing of the party by saying this:

Democratic presidential hopeful Beto O’Rourke released his plan for “LGBTQ-Equality” Wednesday and one element of the plan would ensure that transgender males would be allowed to compete on female sports teams. In announcing the plan, O’Rourke exclaimed that it would “ensure LGBTQ+ Americans can live openly without fear or discrimination or violence and would immediately reverse the Trump Administration’s Discriminatory policies.”

This is so insane and crazy that I can’t read it any longer.   Beto’s idea would ruin girls’ sports, specially soccer where girls are doing so well!
Beto has a lot of problems:
First, he’s been replaced by the guy with a husband, or Mayor Pete.  Beto has a loving traditional wife who stands by her man when he is announcing for president.  The liberal wing would rather see a man stand by his husband.  To paraphrase the old saying, this is not your dad’s party anymore!
Second, Beto has turned boring and weird, i.e. trip to the dentist on video?
Third, he is not running against Senator Ted Cruz anymore.  He is back to being the unknown fellow from South Texas who went to private schools and married a rich man’s daughter.  In other words, he is the classic white guy who benefited from being white in a party that hates that.
So Beto is desperate for the magic to return.  Unfortunately, it’s not going to return.  Maybe he would have been better off getting a show on MSNBC and courting his devout followers until he could run for governor in 2024.
Yes, it’s time to say “adios” to Beto.  He is done and he can blame himself immensely for that!
P.S.  You can listen to my show (Canto Talk) and follow me on Twitter.