Supremes NO to Texas plus COVID and checks & Alexander Solzhenitsyn

Friday’s video: And then Hunter Biden hits the front pages 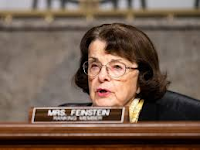 Once upon a time, many Democrats saw wisdom in Sen. Dianne Feinstein.  She was like the charming lady in that song by The Bachelors:

You have lighted the road leading home
Oh, pray for me, when you can (when you can)
But no matter wherever I roam
Smile for me, my Diane

Even some of us in the right saw Sen. Feinstein as a rational voice in party dominated by headcases.
That was then, and this is now.   The vicious left is now going after Senator Dianne Feinstein.
According to New Yorker writer Michael Luo:

Speaking on background, and with respect for her accomplished career, they say her short-term memory has grown so poor that she often forgets she has been briefed on a topic, accusing her staff of failing to do so just after they have.
They describe Feinstein as forgetting what she has said and getting upset when she can’t keep up.
One aide to another senator described what he called a “kabuki” meeting in which Feinstein’s staff tried to steer her through a proposed piece of legislation that she protested was “just words” which “make no sense.” Feinstein’s staff has said that sometimes she seems herself, and other times unreachable.
“The staff is in such a bad position,” a former Senate aide who still has business in Congress said. “They have to defend her and make her seem normal.”

Wow. Wonder when they will start saying the same about the man they nominated for president and who may indeed take over in six weeks?  It's hard for me to believe that Mr. Biden sounds more coherent than Sen. Feinstein.
It's possible indeed that the 87-year old lady has lost a step.  It happens to people of that age!   All of our parents and grandparents have experienced such a thing.
My guess is that all of this started when the lady senator said something nice about a Republican, as Senator Ted Cruz posted today:

The hard Left is vicious. Usually a Jane Mayer hit-piece is reserved ONLY for conservatives.
But now—despite Diane’s[sic] decades of loyal Democratic service—because she dared to say one nice word about a Republican...they’ve released the wolves.

Smile for me, my Dianne, because the vicious left doesn't like you anymore.
P.S.  You can listen to my show (Canto Talk) and follow me on Twitter.