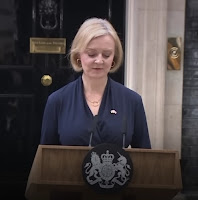 2022 has seen a little history over at the old country.  We saw The Queen's funeral on color TV and I-Phones.  We will see another first:  3 prime ministers in one year.

Bobbies on bicycles, two by two

The rosy-red cheeks of the little children ...."

PM Truss turned out to be a huge disappointment for those of us who hoped for a new version of the late PM Margaret Thatcher.  All of that talk about diversity in UK's leadership plus a pound sterling won't heat your "flat" this winter.

In the end, The Guardian has a point.  She was not up to the job:

In her brief tenure, Ms Truss proved that she lacked the skills to lead. Her judgments and her tone were almost always wrong. Elected by party members without the backing of Tory MPs, she took her victory as a partisan mandate. She exiled the majority of MPs, more of whom had supported Rishi Sunak than her, from her government before being forced to bring some of them back too late. In a Downing Street where neoliberal ideologues and thinktanks were given free rein, she slashed taxes for the rich – a shocking move that proved a deserved economic and political disaster. A run on the pound, a lurch in the bond market and an emergency intervention by the Bank of England followed. Confidence in Conservative economic management collapsed and the opinion polls tanked.

She did not fail because of her economic proposal.  In this, I disagree with The Guardian.  She failed because she did not fight for it and started to go "wobbly" as the late PM Thatcher allegedly said.

In politics, you can't propose and then start walking back your proposal.   It shows weakness and you will end up making a resignation speech.

So we will wait for the next PM.  Maybe they will bring back Boris, a character, but a man who did not back down and spoke his mind.

In all fairness, the UK faces tough challenges.  However, strong leadership can lead the way, as the late PM Churchill showed in the 1940's or President Trump demonstrated when he stood by Judge Kavanaugh.