(My new American Thinker post)
The Beatles have been in the news this year.

First, we got to see the four working on material for an album. It was the closest to being in the studio with the band.  It was incredible to see an album being recorded from square one or sort of the musical equivalent of like watching sausage getting made.  Some of these songs were released as singles, like "Get Back" and many ended up on the Let it Be album. Honestly, I did not think that these were great songs but they are part of the band's history.

Two weeks after Sgt. Pepper’s was released on June 1, 1967, The Beatles went global and presented “All You Need is Love” to the world. They performed the new song in an international telecast seen by millions, as we see here:

The satellite link-up was devised by the BBC, which took the idea to the European Broadcasting Union in 1966.

The project editor was BBC executive Aubrey Singer. Personalities, including Maria Callas and Pablo Picasso, from 19 nations performed in separate items from their respective countries.

The event, which lasted two-and-a-half hours, had the largest television audience to date.

No politicians or heads of state were allowed to take part in the broadcast, and no pre-recorded videotape or film was allowed. Around 10,000 technicians, producers and translators helped make the event happen; each country had its own announcers, with translators narrating where necessary.

In the week before broadcast, seven Eastern bloc countries -- led by the Soviet Union -- pulled out, apparently in protest to the Western nations’ response to the Six Day War.

The Beatles’ day began at 2pm with a camera rehearsal in EMI’s Studio One. An outside broadcast van was situated in the studio car park, which relayed the signal around the world via the Intelsat I (Early Bird), Intelsat II (Lana Bird) and ATS-1 satellites.

Wonder if Maria Callas and the Beatles were ever on the same program before? I don't think so.

“All You Need is Love” became a # 1 song in July and was included in the Magical Mystery Tour album released later for Christmas.

2013: "Sofrito" Cuban food and other fun things to eat A word about June 25

"Bad day for General Custer":    On this day in 1876, a major battle took place near southern Montana’s Little Bighorn River. We remember the battle as General Custer’s "Last Stand".

"We love Ike":    On this day in 1942, General Dwight D. Eisenhower became commander of all U.S. troops in the European theater of World War II.

"Beatles go global 1967":    Two weeks after “Sergeant Pepper’s” release, The Beatles went global and presented “All you need is love” to the world. 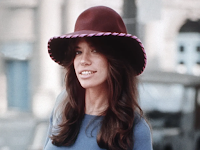 Let's add Carly Simon to the growing list of pop singers who are over 70.    Carly was born in New York on this day in 1945.

My first memory of Carly Simon was her 1971 hit "That's the way I've heard it should be", a very 1970's song.   It was also a great arrangement and her vocals were beautiful.

After that, Carly had other hits, such as "You're so vain", and married James Taylor.

We wish Carly a happy birthday.    She was one of a group of great female song writers/performers who released music in the early 1970's.    It was great music.