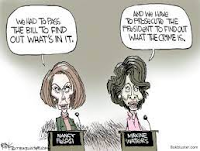 Arizona gives Democrats a taste of their own sanctuary medicine

It finally happened.  Arizona has gone "sanctuary" and wait until the Democrats go ballistic screaming that laws have to be respected in the U.S.  This is from Fox News:

Arizona Gov. Doug Ducey signed a gun rights law this week that preemptively protects gun owners in the state from any federal gun control laws that are passed, according to reports.

The Second Amendment Freedom Act was signed two days before President Biden announced several executive actions, including asking the Justice Department to propose a rule to stop "ghost guns," which are "kits" people can buy legally, then assemble to create a functioning firearm without a serial number.

"That was a proactive law for what is possible to come out of the Biden administration," Ducey told KTAR-FM radio in Glendale, Ariz., on Wednesday, adding the bill doesn’t change any current laws.

This is a "neat idea," as Oliver North once said.

First, it will expose the Democrats' selective indignation over law enforcement.  It's okay to say that cities can disobey federal immigration laws but not the 2nd Amendment.  Good luck with that message. Wonder what the two U.S. Senators will say about this?  Senator Mark Kelly is up for reelection in 2022.

Second, it may be the beginning of states bringing the 10th Amendment back to life.  Frankly, it's about time, especially in light of the tsunami of executive orders coming from the Biden White House.