The Supreme Court just pulled Biden out of a hole 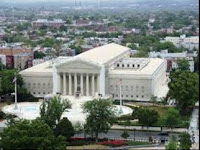 Another day and another defeat for President Biden in the courts. This is from Adam Shaw:

The Supreme Court’s ruling late Tuesday, which ordered the Biden administration to reinstate the Trump-era Remain-in-Mexico policy, marks the latest legal defeat for the administration on the subject of immigration.

In a 6-3 decision, the court denied a request to stop a federal court ruling ordering the administration to reinstate the Migrant Protection Protocols – which has become known as "Remain-in-Mexico" – a major 2019 border security program that kept migrants in Mexico as they awaited their hearings.

Opinions aside, there are two big winners from this ruling.

First, the Biden Administration has been pulled out of the hole that they put themselves in months ago.  Opening the border in the middle of a pandemic put many Democrats in electoral risk, such as Representative Henry Cuellar from South Texas.  They will publicly oppose the opinion and pop champagne in private that some order will be restored.

Second, President Lopez-Obrador of Mexico must be happy.  The so called "Remain in Mexico" policy stopped the caravans and kept people in their home countries.  Why walk to the border if you have to remain in Mexico?  These people could not work in Mexico anyway.  Also, the cartels won't have it so easy now that people are less likely to travel.  Why pay a cartel if you can't get into the US?

Thanks to the Supreme Court for bringing some common sense to the chaos on the border.  My guess is that Democrats are privately thankful too.