President Lopez-Obrador and the Wall 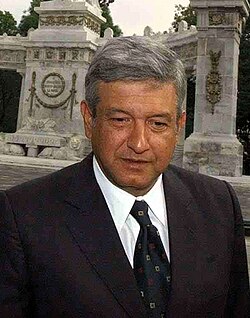 Over the last few years, I’ve had conversations with friends in Mexico.  We usually end up talking about the border.  For us, the border is illegal immigration.  For Mexicans, it’s guns and cash corrupting a very fragile political system.
As a Mexican friend said recently, the cartels have the politicians in their pockets, especially in the small towns where many of these vans full of cash and guns drive through.
There are many reasons to build that border wall, as former Secretary of Education William Bennett said on Sunday:

By weight, 86 percent of heroin that entered the United States in 2016 was of Mexican origin, according statistics from the Drug Enforcement Administration.
“After 9/11 we shut down the border. When we shut down the border, drugs didn’t come in,” Bennett said. “If you shut down that border, if you close it off, if you build a wall, it can have a real and profound difference.”

There is another reason, as any rational Mexican will tell you.
On a weekly basis, lots of cash and guns go south.  They are the profits and rewards of the drugs going north.  According to unofficial estimates:

Officials in Mexico believe the tide of laundered money could be as high as $50bn per year, a sum equal to about three per cent of Mexico’s legitimate economy — more than all its oil exports or spending on key social programmes. Internationally, money laundering represents between two and five per cent of global GDP, or between $800bn and $2tn annually, according to the UNODC.

It would be more difficult for money or guns to go south if you had a wall on the border.
So President Trump should pick up the phone and call President Lopez-Obrador.  He should thank him for keeping the caravans in Mexico and discuss the benefits of the border wall.  Why wouldn’t the Mexican president support the wall?  I’m sure that the Mexican army and police would love to see that wall go up.
The lack of a stable border hurts both sides.
PS: You can listen to my show (Canto Talk) and follow me on Twitter.
Tags: President Lopez-Obrador and the Wall To share or post to your site, click on "Post Link". Please mention / link to the My View by Silvio Canto, Jr. Thanks!
Posted by Silvio Canto, Jr. Post Link ---> 10:30 PM