The week in review with Bill Katz, the editor of Urgent Agenda 01/24 by Silvio Canto Jr | Politics:
Guest: Bill Katz, the editor of Urgent Agenda.....
President Biden week 1 and lots of executive orders from deportations to The Keystone Pipeline to others.....Impeachment trial # 2 set for the week of February 8th.......The violence in Portland.........
and more stories.......click to listen:
Posted by Silvio Canto, Jr. Post Link ---> 9:00 PM 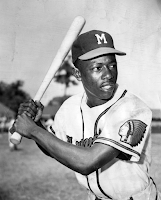 We learned of Hank Aaron's death.   Many of us remember that Monday Night Game of the Week when Hank Aaron hit #715 and broke Babe Ruth's home run record.  Or, our parents remember his home run in 1957 to clinch the NL pennant for the Milwaukee Braves.  Or, going into the Hall of Fame with Frank Robinson in 1982.
Today, we recall 1954 or Hank Aaron's first year in the majors.  Two years before, he was with the Negro American League champion Indianapolis Clowns.
Like other young players, Hank Aaron went to spring training in 1954 hoping to crack the major league roster.  It happened when veteran Bobby Thomson of "The Giants win the pennant" fame was injured.  Aaron made the roster and you know the rest of the story.
Early in the 1954 season, he hit # 1 of those career 755 home runs.  The pitcher was veteran Vic Raschi, the former Yankee now pitching for the Cardinals.
I saw Aaron play in 1971.  I followed his career closely, from collecting baseball cards as a kid to catching the games on TV.
Aaron was a great player and a gentleman.
P.S.  You can listen to my show (Canto Talk).
Posted by Silvio Canto, Jr. Post Link ---> 7:44 AM