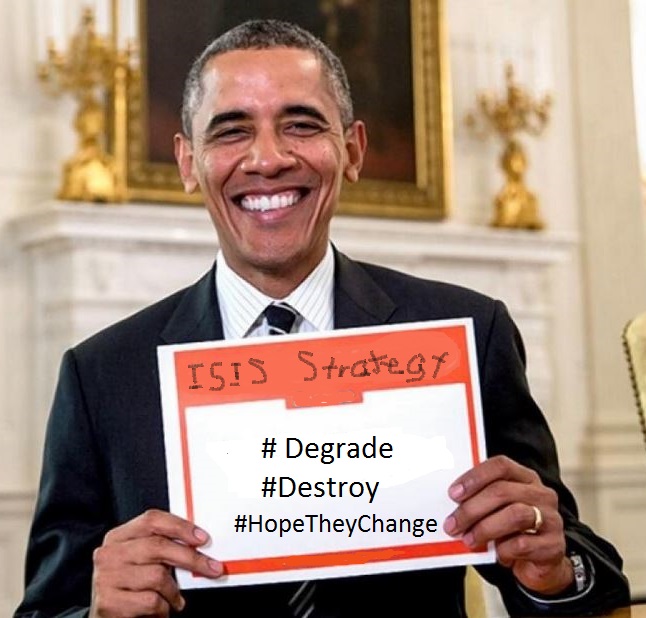 (My new American Thinker post)
On Friday morning, President Obama went on TV and said that ISIS was now contained.  A few hours later, ISIS reminded the world that containment does not apply to their “chapter” in France.
Over and over, we are watching the total and complete failure of President Obama’s approach to fighting ISIS, as David French wrote:

ISIS has been allowed not just to live, but to grow. And now it’s demonstrating massive increase in its destructive reach. Within the space of days, it has apparently brought down a civilian airliner, bombed Beirut, and now reportedly launched a multi-pronged urban assault in a western capital. This is what happens when terrorists are allowed safe havens and given free reign [sic] to recruit and spread their influence.

President Obama has been wrong about this war from day one.
He pretended to end wars, but the enemy is still shooting at us.
He wants to close GITMO, but the events in Paris demonstrate that we need to capture and interrogate these people.  We may need a few GITMOs, in other words.  We could also use a few water buckets just in case.
He withdrew from Iraq just at the moment that the country needed us most.  What would South Korea look like today if President Eisenhower had pulled the troops?  It wouldn’t look like South Korea.  It would have been overrun by North Korea, as happened in Vietnam when we pulled the plug.
He has projected weakness, from drawing lines in Syria to coddling tyrants in Iran and Cuba.
He has not taken our southern border seriously.  Sanctuary cities are also a magnet for terrorists disguised as people coming here for a job.  The lesson of Paris is that you have to control who is in your country and what influences they are under.
The U.S. needs to get deeply involved in the destruction of ISIS because they are deeply involved in the destruction of the U.S. and everybody who disagrees with them.
P.S. You can listen to my show (Canto Talk) and follow me on Twitter.

A look at the Paris terrorist attacks