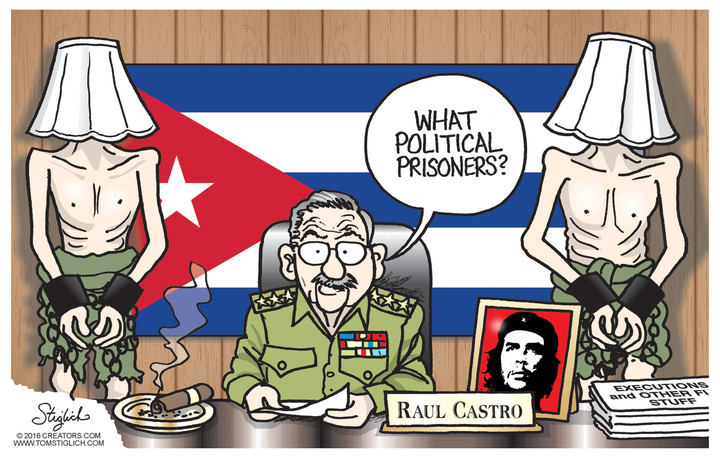 Armando Valladares saw it all in Cuba’s political prisons.  He wrote about it in “Against All Hope,” an international bestseller that should be required reading in any freshman class.
Reinaldo Arenas wrote his story in “Before Night Falls: A Memoir.”
In both cases, they relate the horrors and torture of Castro’s prisons.  I believe everything because their stories are similar to what my father’s late cousin told me and what many other political prisoners have said.
So is anyone surprised that the Castro regime would use “sonic attacks” on prisoners?  I am not surprised at all.
This is a story from The Daily Signal:

A group of Cuban exiles and former political prisoners gathered on Capitol Hill Wednesday to recount human rights abuses that they and their relatives suffered at the hands of the Fidel Castro regime.
In a hearing organized by Freedom House and the Justice Cuba International Commission, survivors told gripping stories about friends and family who were imprisoned, tortured, and killed for resisting communist rule in Havana.
The tales of two former political prisoners stood out among the heart-wrenching accounts of abuses, if only for their parallels to the strange, unexplained sonic attacks inflicted upon U.S. diplomats in Havana last year.
Ernesto Diaz Rodriguez and Luis Zuniga, anti-Castro dissidents who were sent to hideous regime prisons, said they were repeatedly subjected to “ultra-sonic” torture over more than 20 years in confinement.  “The methodology consisted of placing large loudspeakers around 4 feet high each … at both ends of the hallway of cells,” Zuniga recalled of his experience in 1979. “Then, they were connected to some sort of electronic device that produced high-pitched sounds.”
“The sounds oscillated from high pitch to very high pitch that almost pieced the eardrums,” he added.
Zuniga went on to describe symptoms from the torture sessions, saying that he began to feel “increasingly uneasy” and “unable to think.”
Other prisoners suffered debilitating headaches. The brutal punishment lasted for days, he recalled, leading to the suicide of a fellow inmate.
“This torture was kept [up] for days and nights without a respite,” Zuniga said. “It ended when one of the prisoners … hung himself. He died from the torture.”
For the former prisoners and exiles gathered at Wednesday’s hearing, the memories of audio torture were made fresh this summer, when it was revealed that American diplomatic personnel had been subjected to similar treatment over the previous year.

This story confirms that Cuba’s communist regime was perfectly capable of using this technology against its enemies, or the Cuban political prisoners.
Did they use it against U.S. diplomats?  Did someone give the order to target U.S. diplomats?  We don’t know for sure, but they had the capabilities to do it.
As some have speculated, the attack on U.S. diplomats may have come from a third country.  By the way, North Korea is sending a delegation to Cuba to renew old relations.  Russia has been talking to Cuba, too.  North Korea and Russia were the two countries that immediately came to mind as potential sources of these attacks on U.S. diplomats.
We will wait for the U.S. to present its report on the sonic attack.  Let’s not forget that Castro’s Cuba had lots of experience engaging in these attacks.
PS: You can listen to my show (Canto Talk) and follow me on Twitter.
Tags: Sonic attack in Cuba's political prisons To share or post to your site, click on "Post Link". Please mention / link to the My View by Silvio Canto, Jr. Thanks!
Posted by Silvio Canto, Jr. Post Link ---> 6:00 PM

According to new poll, most Americans don't want to talk politics over Thanksgiving dinner..really? who paid for that poll? maybe the people who paid millions to hear that Hillary Clinton had a 90% chance of wining....we have too many worthless polls in the US! Too many polls!
— Silvio Canto, Jr. (@SCantojr) November 19, 2017

Gettysburg Address 1863 plus the 2016 election with Barry Casselman