Saturday's video: A word about the video commentary 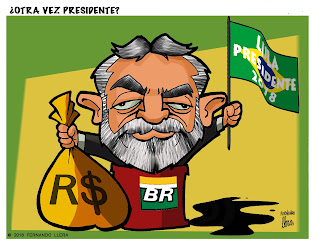 Over the years, I’ve compared Brazil’s ex-president Luiz Inácio Lula da Silva to President Clinton.  In other words, they got away with lots of unethical ways because of a strong economy.
Down in Brazil, no one wanted to talk about President Lula’s corruption because the economy was doing so well.  I remember a Brazilian acquaintance once saying something like this: “Who cares about Lula’s pockets?  My pockets are full.”  He was talking about President Lula’s good timing – i.e., strong economy during his two terms!
It looks as though President Lula’s good luck has finally run out.  The Brazilian economy is not doing much better, or 1% GDP in 2018.  It’s hard to stay popular when you are corrupt to the core and people can’t find all of those jobs that you promised them.
So Lula is going to jail, as a Brazilian court has just decided:

Brazil’s Supreme Federal Tribunal (STF) ruled early Thursday morning against a habeas corpus petition that would have kept socialist former president and presidential frontrunner Luiz Inácio Lula da Silva from beginning to serve a 12-year prison sentence for corruption.
The decision does not prevent Lula, as he is popularly known, from attempting to register on October’s presidential ballot but would mean that the Workers’ Party (PT) candidate would have to campaign from prison.

From prison?  Probably not!
Lula going to prison is the best thing that has happened to Brazil.  It sends a clear signal that the Brazilians are serious about ending the crony capitalism that has made corruption a way of life down there.
My guess is that Lula will have a lot of company in prison soon.  They call it “Car Wash” down in Brazil, and there are lots waiting to get washed.
Good for Brazil!  Keep that car wash washing!
PS: You can listen to my show (Canto Talk) and follow me on Twitter.

Millennials and the round earth?

Here is a headline:  "A Third Of Millennials Aren’t Sure The Earth Is Round, Survey Finds"!

According to the poll, 18 to 24-year-olds are the largest group who refuse to accept it.

Remember that this is the group that votes Democrat:  2-1 according to studies!    Also, remember this group is deeply invested that Climate Change Is World's Biggest Problem!

January 2007: Hugo Chavez and the investors


The incredible Hugo Chavez is off to a loud start in '07.

At the same time, the international investors don't like it. See Venezuelan Plan Shakes Investors:


"Investors reacted with alarm here and in markets in the United States and throughout Latin America on Tuesday as they measured the impact of the plan by Mr. Chávez to nationalize crucial areas of the economy.
Memories of past nationalizations during another turbulent era, in places like Cuba and Chile, helped drive down the Caracas stock exchange’s main index by almost 19 percent.
Markets across Latin America declined Tuesday, but the drop was modest in most other countries, with the Bovespa index in Brazil and the Bolsa index of Mexico each falling 1.9 percent. The measured reaction appears to reflect the belief of investors that Mr. Chávez, in spite of his words, has limited influence on the economic policies of other governments in the region.
“It has not turned into a widespread contagion,” said David Riedel, president of the Riedel Research Group, who follows emerging market stocks.
Compared with the 1990s, “you have a more sophisticated base of investors that understand that Mexico is different from Venezuela.”

The lesson is simple. Hugo is a Latin American problem. His crazy ways hurt Latin America because they scare investors.

It's time for the elected leaders of Latin America to stand up and tell Hugo Chavez to behave.