The Trump-Clinton contest after the conventions with George Rodriguez

The Trump-Clinton contest after the conventions with George Rodriguez 08/02 by Silvio Canto Jr | News Podcasts:

Guest: George Rodriguez, South Texas conservative activist.........We look at the latest from the political scene, such as Mr Trump and the military family and the apparent bounces from the convention..........and other stories.......

El Chapo can’t sleep ‐‐ or so they say 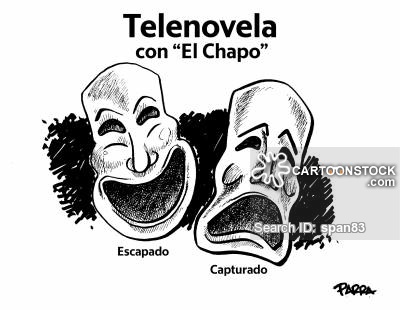 (My new American Thinker post)
The El Chapo story is so good that a telenovela would not do it justice. Frankly, the daily news reports from Mexico are more dramatic than any TV script.   The latest is just incredible, according to Joshua Partlow:

Joaquín “El Chapo” Guzmán, the world’s most notorious drug lord, has been having trouble sleeping.
The lights in his prison cell are on around the clock.
The surveillance video and prison staff watch him 24/7.
If a dozing Guzmán even inadvertently covers his face or crosses his arms, prison guards rouse him, according to his lead defense attorney, José Refugio Rodríguez.
“The conditions that he’s being held in are very drastic. He’s a victim of cruel and inhumane treatment well below the minimum standards established by the United Nations,” Rodríguez said in an interview. “This is practically torture.”

Well, he may be the victim of torture. My guess is that the word came down from President Enrique Pena-Nieto that he can not escape again.
Beyond that, it is silly to feel sorry for a guy who specialized in cold-blooded murder.
El Chapo has a list of atrocities that should land him in an electric chair, to say the least. This is just a partial list of them:

Boca Del Rio Massacre — On September 20, 2011, gunmen from Los Matazetas working at the time under orders of the Sinaloa Cartel dumped the tortured bodies of 35 men and women along a city highway in Boca Del Rio, Veracruz. The bodies were left behind along with a narco banner where the Sinaloa Cartel forces took credit for the murder and threatened Los Zetas.
Nuevo Laredo Massacre 1 — On April 17, 2012, El Chapo’s forces aided by the Gulf Cartel moved into the border city and Zeta stronghold of Nuevo Laredo in an attempt to take control of the border area and left the dismembered bodies of 14 men inside trash bags that had been left inside a minivan outside of Nuevo Laredo City Hall along with a narco-banner signed by El Chapo and addressed to Los Zetas. Despite the clear cartel link to the murder, Tamaulipas authorities tried to claim that the victims were not related to drug trafficking activity and that there was no war between rival cartels in Nuevo Laredo.
Nuevo Laredo Massacre 2 — On May 4, 2012, Los Zetas hung nine Gulf Cartel members from a bridge, but the Gulf Cartel and the Sinaloa Cartel responded just hours later. The response was the headless bodies of 14 Los Zetas members placed in a vehicle near the mayor’s office. The heads were placed in an ice chest also by the mayor’s office. Along with the gory find, the gunmen left a banner signed by El Chapo where he threatened the Nuevo Laredo Mayor and the local police chief for siding with Los Zetas and trying to ignore his presence.
Tubutama Gun Battle – On July 1, 2010, Sinaloa Cartel gunmen clashed with their rivals from the Beltran Leyva and Los Zetas Cartel leaving more than 20 dead near the rural town of Tubutama Sonora, just 60 miles from Nogales, Arizona. A Youtube video shows in gory detail the carnage of the battle.
Maria Susana Flores Gamez – The former Miss Sinaloa beauty queen, met her untimely death in a hail of gunfire on November 2012 in a rural area near Guamuchil, Sinaloa. Flores had been accompanying Chapo’s top enforcer Ivan “El Cholo” Gastellum when the Mexican military went after them. After a lengthy chase and gun battle, Flores ended up in a pool of blood while the military arrested multiple gunmen.

And there are probably more, smaller and less publicized.
Frankly, there is nothing romantic or nice about this man. He is a killer who shot men, women and children to settle scores with the law or rival cartels.
So let’s bring El Chapo to the U.S. as possible. The good news is that he’ll probably get a bit more sleep. The bad news is that he is not escaping again and justice will be done.
Sleep deprivation? There are thousands of Mexicans dead!
P.S. You can listen to my show (Canto Talk) and follow me on Twitter.
Tags: El Chapo in Mexico To share or post to your site, click on "Post Link". Please mention / link to the My View by Silvio Canto, Jr. Thanks!
Posted by Silvio Canto, Jr. Post Link ---> 6:00 AM

The 2016 election with Barry Casselman, The Prairie Editor