The shootout at La Malquerida 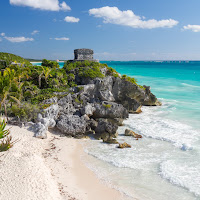 We've been busy following caravans traveling through Mexico to the U.S.  This week, we got a reminder that violence is still out of control south of the border.   This is a post by Jeremy Kryt:

Two foreign female tourists were caught in a crossfire between rival crime groups and shot to death last Thursday in the high-end resort town of Tulum, Mexico. Three other people were also wounded when the firefight broke out in the popular restaurant, La Malquerida, not far from the beach. Of the two women who were killed, one was from Germany and the other India.

“They were just in the wrong place at the wrong time, and got caught in an exchange of gunfire between competing drug traffickers,” said a high-ranking Mexican police commander, who agreed to speak with The Daily Beast on the condition of anonymity.

“It’s a sad mistake for the victims, but such cases are not rare or unusual anymore [in and around Tulum]. When a firefight breaks out no one is safe,” the commander said.

Yes, the sad result of being in the wrong place at the wrong time.  It happens but it's not really supposed to tourists visiting your country and dropping hard currency into your economy.

Tulum, a resort known for its Mayan-era ruins and pretty beaches, is quite popular with celebrities.  Unfortunately, there is been some violence recently, as the article pointed out:

An American firefighter was kidnapped and murdered from an all-inclusive resort in July. In June, another American was wounded in a shooting that killed two other people when gunmen opened fire from jet skis. A man was executed outside a law office in Cancun this August, prompting additional headlines about how violence “continues to take over” in the region.

A report by Mexican news outlet La Reforma, from earlier this year, indicated that at least five cartels are now operating in the Riviera Maya and reports of violent crime in Tulum alone had gone up 783 percent since 2019.

For years, I heard my Mexican friends say that the Mexican government will never allow the violence in the tourist locations.  In other words, they don't want to scare the tourists, and their dollars, away.  Based on what we are watching in Tulum, it looks like the cartels have moved their operations anywhere that they want to move them to.   If so, then Mexico has more problems than we thought they had.